Babylon A.D.‘s long-time frontman Derek Davis has released a video for the song “Mississippi Mud” from his upcoming new solo album Resonator Blues, which will be released on June 1, 2019.

Davis‘ website (back in April 2019) states as follows about his new solo album:

““Resonator Blues” is not your typical blues album. Oh it’s bluesy all right! But with a taste of Americana, Folk, Hillbilly Twang, Southern Rock, Traditional and Jump Blues all neatly forged together by a master craftsman “Derek Davis”. 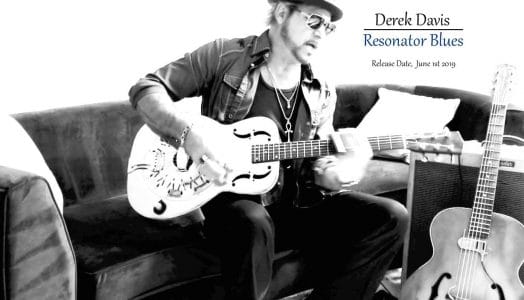 Twelve mesmerizing tracks of undeniable depth that pin the listener’s ears back and demand they sit up and take notice. Bottleneck Slide is prevalent on nearly all the tracks along with the harmonica and sometimes a blistering Texas Telecaster lead will be heard.

This is a multifaceted album, a journey of sorts all rolled into one great magical music ride across America down highway 61. There is a plethora of different moods and tempos. Every song has the feeling of deep conviction with memorable story telling and musicianship.

The vision of Derek Davis, who not only sings and plays all the different guitars and bass on the record, also does a fine job creating a real and unique production that is unmistakably his own sound.

The voice of Derek Davis is uncompromising and unmistakable. He belts out each song with emotion, passion and power, using his amazing gift to reach the listener and weave his tales. The voice is gritty yet melodic and every song is sung as it should be. His guitar work is exceptional, raw, and captivating like the songs.

Davis, pens all the tracks except for the two covers on the album, Son House’s “Death Letter Blues” and the Elmore James classic “It Hurt’s Me Too”. He takes these songs to the next level with some tasteful slide playing and he packs the tracks with some great vocal performances. The weeping distorted slide and pain drenched voice of Davis’s version of “It Hurts Me Too” makes one wonder where he found this old soul inside himself. The Dobro inspired “Death Letter“ is so believable it’s is if you’ve been transported back in time and are actually sitting on a front porch listening to the gospel of the Godfather of blues himself, “Son House”. 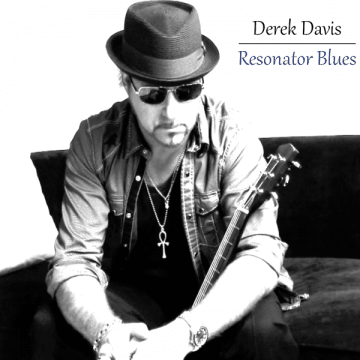 The ten originals songs that Davis has created make an emotional roll-a-coaster ride, lyrically and musically paying homage too so many different types of American blues music. The title track “Resonator Blues” is a slide driving, Piano teaser in the tradition of early Chicago blues, about a foul mouthed woman and a softhearted man at his wits end.

The Southern hillbilly sound of “Jesus Set Me Free” about two brothers on the South side of the Civil War play out on the battle fields, where “Robert E Lee”, “General Grant” and ‘Stonewall Jackson” come to life! The lyrics’ “Blood on the Cotton Fields, Dead men in the Grass”, Red Death Here It Come’s”, the story is vividly told. The song is like a script written for a movie. You are there! The song was written and recorded on a 3 string Cigar Box Guitar.

The track “Penitentiary Bound” is a sad and true folk story about a father and daughter separated by the hell of the prison system dividing them. It could have been written by, Dylan, Kristofferson, or Arlo Guthrie around 40 to 50 years ago.

“Sweet Cream Cadillac”, is a 1960s foot stomping, hand clapping, dancing at the Hop type of fun up-tempo song, with a memorable slide-lead on a Silvertone acoustic.

On “Red Hot Mama,” Davis brings some Texas strut. He must have had blisters on his fingers for days from burning the strings on the frets as brazen as Albert Collins ever has. This is a not-stop electric lead killer, accompanied by the ferocious harmonica playing of the legendary “Charlie Knight’ clocking in at four minutes with no breaks in the action.

The song “Mississippi Mud” is about finding the blues down by the Delta as the sound of Muddy Waters pulls you into the Juke Joint and soon with the track “Whiskey and Water” you arrive. As Derek sings, “Get me another drink bartender and pore my friends one too”. Both tracks are similar in that they both provide more great story telling and super-charged slide-guitar playing.

The tracks “Unconditional Love” and “Back In My Arms” are playful and funny tongue-in-cheek stories about love and hope. Both songs have some great resonator slide-guitar playing and the accompanied harmonica blazing on “Unconditional Love” makes the ride all the more that sweeter.

The last track “Prison Train” is like an updated “Train I Ride” meets “Folsom Prison Blues”.  You can feel and hear the iron wheels screeching and rolling into hell where Cool Hand Luke is waiting in the cellblock for ya. All bottleneck and more searing harmonica accompany the voice of Derek Davis. Such a tale of whoa as there ever was.

To sum it all up, Davis has made a hell of an American blues album. In a day and age where it seems music is made by computers and programmers that have sucked the life out of the music of today, it’s great to find a hidden gem that can and will stand the test of time. Vinyl anyone?”

Mississippi Mud is a swamp, blues rock anthem with a great story about the the power of the great Muddy Waters and his effect on new blues artists. https://d…