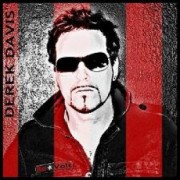 The revolution is moving across the nation! Rise up! Re-volt! Man your stations! The revolution is moving across the nation! Re-Volt! A bull horn blasts its opening line salvo from the title track of the new solo debut release by Derek Davis, former singer/songwriter of Arista recording artists Babylon A.D. The new release by Derek Davis will be released on January 30th, 2012 on Apocalypse Records and can be previewed at derekdavismusic.com.

The hard rock, retro/metal mind blower of eleven tracks captures an angst ridden, sometimes dark, and yet poetic true to life world in which most of us can now relate. (Did someone say perfect timing?) But this is not your typical metal rock formula release.

From the opening tracks revolution call of “Re-Volt”, to the second song “Bad Man Cometh”, an up-tempo motion picture style soundtrack with… surprise, a rapid-fire rap by guest artist Monte Carlo. And through the third track, a bombastic guitar driven slow grinder called “Tied Down And Hammered” — “you kick me with your steel toed boot — you hit me with your iron fist.” You just might think you have the man and the sound all figured out. Then suddenly out of the blue comes “Troubadour”, a beautifully crafted acoustic song with a surreal story of new found love and hope, with the Spanish style guitar playing and glass-like strings adding depth and emotion to the song’s moving lyrical content. The battle cry of “American Jihad” follows with a funkafied bass line driven by a menacing vocal attack, with Derek delivering every line with bullet like precision. “Hollywood Heartbreak” is a solid up-tempo rocker with a “Born to Run” like theme. On track seven, Derek really breaks out the production with “The Promise”, a heart breaking paradoxical death bed love story. The music is spacious and mystical, with clean roto-verb type guitar sounds, a strange rhythmic drum beat and a stunningly haunting vocal. Up next are “Judas Kiss” where Derek cranks out a brutal tale of betrayal and revenge, the dark and vampirish “I Love U 2 Death”, the temptation driven sexy groover “Love Star”, and the final track “Desperate”, a great big luscious ballad. A wall of sound and orchestration, with the arrangement and lyrical content perfectly weaving a sad tale of loneliness and isolation, “Everybody’s desperate just like you.”

Derek Davis has brought together an eclectic mix of songs. “It’s not the Beatles’ White album, but I feel I have had the freedom of expression to write and produce music the way I have always wanted, something you usually can’t do with the restrictions of a major label,” says Derek.

Lyrically and musically painting a moving picture landscape of frustration, revenge, love and destruction, and at the same time beautiful and thought provoking, Derek has created a true modern anthem rock album, with a wild and twisted roller coaster ride of emotions for its listeners. The melodies, musicianship and production are excellent and the execution and arrangements all fit together nicely. Vocally, Derek’s style is high-octane grit, full of electric energy, different enough to push beyond the modern day Daughtry clones and provide the matercombination of power and attitude.

The revolution is moving across the nation! Re-Volt!