Babylon A.D. appear to have taken one more step towards the release of their new studio album Revelation Highway, with the apparent unveiling of the album cover. Revelation Highway is scheduled for release in the fall of 2017. 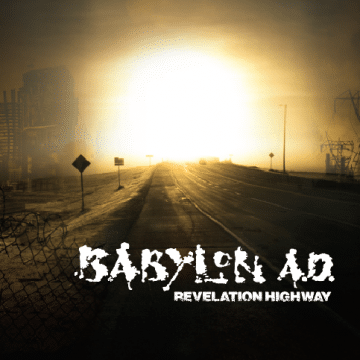 Sleaze Roxx interviewed Babylon A.D.‘s frontman Derek Davis at the Rock N Skull Festival back on October 28, 2016 during which the singer talked about bow many tracks will be on Babylon A.D.‘s new studio album: “Well, we’re shooting for twelve. We want to do ten at least but we’re shooting for twelve and we’re probably going to record like eighteen [songs]. That’s what we are thinking. That’s what’s on the agenda to do and accomplish. That way, we can make another record and follow it up pretty quickly. We don’t want to wait like two more years or something like that. We’re trying to make a record every year. You know, once a year put another one out so that the band keeps moving along.”

In terms of whether the new Babylon A.D. album would be self-released or through a label, Davis stated: “We have distribution through Europe right now. We’ll have distribution through an American subsidiary but it will still be predominantly on our label. We’ve had our label now since 1999. We like to keep it that way, basically so we can control — have more control. Because once you say, “OK. Yeah, you guys have control, well, there goes all your iTunes money, There goes all your…” And then they say “Well, here’s a piece of what you get.” And you’re like, “No man! I wrote this song. I don’t wanna…” -You know what I mean.? I’m the one who is playing it. I am the one who writes it. It’s not like the others where you get 10% of your records. You know, if you can control it, well we get 100%. And then we tell the distributors, “You get this amount. We get to dictate the terms. So it’s a lot different than it was. Sure, you’re not going to sell as many records as you did in those days since there are not as many fans as back in those days. But the fans that are around — they are hardcore and they will buy it. It’s mainly to just keep the brand going and have a good time on why we are doing it right now. You know, here we are the Rock N Skull. [Jack Russell’s] Great White is getting ready to get on. This could have been 20 years ago [laughs] you know what I mean, and it’s still “This is fun.” So that is awesome!”