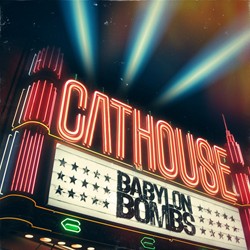 The Babylon Bombs are all set to release a brand new single entitled “Cathouse’ on February 1st. The song is the Swedish band’s first since they announced they would be going on hiatus in late 2010.

“Cathouse” was written by frontman Dani, who left the Babylon Bombs in early 2010 due to being tired of both touring and the music business, and mixed by Chris Laney (Crashdiet, Candlemass, Europe). Laney produced the band’s final studio offering, 2009’s critically acclaimed ‘Babylon’s Burning’.

The classic Babylon Bombs line-up of Dani (vocals and guitar), Jon (guitars), Rick-y (bass) and Swaint (drums) have reunited for a one-off show in Germany on February 23rd. The show is a ‘re-do’ of the one they had to cut short back in 2009 because Swaint fell off the drum riser and broke his back after only three songs.

The band tells SleazeRoxx.com that the reunion “felt so good we recorded this single and have already got a lot of offers for gigs later this year.” Does that mean Babylon Bombs are back for good? “We’ll see, is all I can say” is their current position, so only time will tell.

To keep up to date on the status of Babylon Bombs visit www.babylonbombs.net and www.facebook.com/babylonbombs.