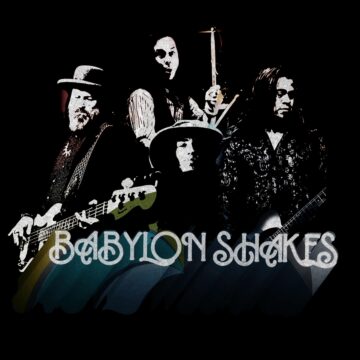 “Staunton, VA based rock band Babylon Shakes happily announce the completion and official release date for their second full length album titled “Vintage Soul RocknRoll”. The album will be released under the band’s own vanity imprint label, Blues Mountain Records on Friday, December 10, 2021. Digital, streaming and physical CD copies will be available with a vinyl release slated for March 2022.

Babylon Shakes began as a three-piece sleaze metal juggernaut in late 2017, releasing an independent EP and then the 10 song “Exile to The Velveteen Lounge” in February 2019 on HighVolMusic. The band garnered much acclaim and played several high profile shows with Tora Tora, Warrant, Hardcore Superstar and Every Mother’s Nightmare while hot on the success of singles/videos “Velveteen Libertine” and “Makin’ A Million” but by the middle of 2019, bassist Gary Jordan had switched to guitar and Dave Elmore was brought in to fill the bottom end.

Simultaneously, the band recalls that their collective tastes and songwriting processes had begun to change. “We began playing more acoustic material and found ourselves reaching back deeper into the 70’s. We started playing in open tunings and it opened up this entirely new universe of creativity. The Stones, Faces and Allman Brothers started to heavily influence our sound and we absorbed every bit of it. We truly found ourselves as a band and it redefined us completely” remembers singer/guitarist Chris Clark. “We went back to the well and just drew from deeper, more abundant waters”.

During the COVID 19 lockdown period of 2020, the band had no choice but to halt playing live shows and decided then to do the only thing they could- begin making the next album. In August, they gathered in Gary Jordan’s basement studio and got underway laying down basic tracks for the eleven songs that would take shape and become crafted into this unique blend of southern rock, blues and highway boogie.

“Vintage Soul RocknRoll” is a tour de force of moods and textures beginning with the sprawling epic-like “Is It Any Wonder” which details the lonely journey of a spurned lover walking through the rainy streets of Savannah with a bottle in his hand. “Feather on The Highway” is a super upbeat road anthem that speaks to the frailty and struggle of life complete with a nod to Sly and The Family Stone in wah- drenched breakdown. “Another Broken Halo” reaches down into the despair of seeing a relationship deteriorate from the outside and never knowing the depths of pain and isolation radiating from inside the breakup. “All My Mirrors” kickstarts the album back into Stonesy party mode while the blues harp and slide driven “Drink My Wine” fills every empty glass in the house on the wheels of bassist Chris Herninko’s funky groove.

“Same Ol Story” is a tale of empty promises with a wink and a nod over a huge, monster truck rhythm and guitar riff. Clark and Jordan align for a true southern dual harmony guitar exchange just prior to the main solo. “Sick and Tired” is short and sweet but packs a memorable chorus while ”Hatful of Soul” longs for peace and unity in a time of political division in tandem with drummer Jeff Mortimer’s unmistakable hard charging cowbell. “Absinthe Minded Lovers” slows the pace down slightly into a gentle melodic groove leaving the listener alone in complete repose to mellow out into the brilliant album closer “Until We Dream Again”. “Dream” is an acoustic folk song on a psychedelic trip through the picturesque Blue Mountains of the Shenandoah Valley.”

Babylon Shakes performing “Is It Any Wonder?” live at BendyQ in Upperco, Maryland, USA on September 25, 2021: