It’s been exactly one year since the three Babylon Shakes band members first met each other and the group’s frontman Chris Clark has posted a message via Facebook looking back to that first meeting. Since that time, Babylon Shakes have been quite busy releasing their debut EP Exile To The Velveteen Lounge Vol I; playing a number of shows including M-Pre Party in Columbia, Maryland, USA in early May 2018; and, signing with HighVolMusic. 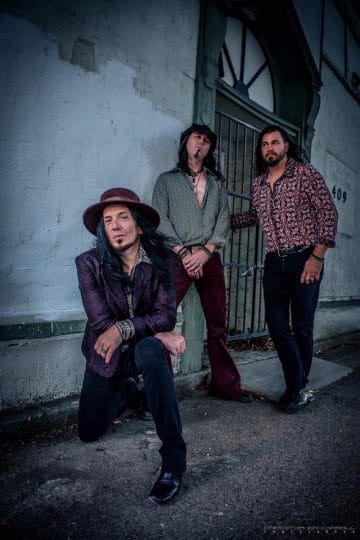 “So exactly one year ago to the day, we were standing in Gary’s basement shaking hands for the first time, dressing up into 70’s thrift shop clothes, taking that first shot of Jameson and launching into that first blues jam that exploded into “Sunset Striptease”. Morty bashing away at his drum kit like he had heard the song for ages on classic rock radio; Gary laying into the pocket like it was hisown. Good lord and it was just the three of us! Would we need a another guitar player? Would it make a difference? Can I possibly sing, play rhythm, lead and move around naturally onstage at the same time? Does it even matter? The emotions take over the way ions become charged in a storm cloud and before you know it, its raining like hell and you’re right there in the middle of it all. Smiling. Laughing. Feeling your little boy heart burst like you just hit a line drive right out of the park and your rounding third for home.

It doesn’t matter what’s happening outside this room, because this is where it’s at. It could all fade into meaningless forgotten party banter, and civilization wither into rubble because after years and years of sacrifice, self-doubt, second guessing, going broke, going crazy, losing jobs, losing your sanity, walkin out, walking off and just plain of laying down in the dark and wondering why the hell you were even put here..you feel it..you feel the light of your purpose strike and crackle into flame. You feel it and you see it on your brother’s faces and you know there is no turning back from this moment. All those guys looking back at you from the posters on your wall are smiling back you and nodding in approval. Joe and Steven..Mick and Keith..Michael Monroe and Andy McCoy….thumbs up, boys!