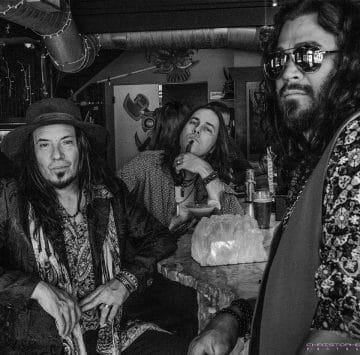 “WOW!! 2018 has been an amazing year for Babylon Shakes and we have no intention of slowing down now. We are prepping and planning for 2019, which includes a full length release of Exile to the Velveteen Lounge and with it, new t-shirt designs. So, to make room for new merch, we have slashed the prices on all apparal. Tees/tanks are all $10, sweatshirts are $20 and garage shirts are $30 and sizes are limited. Visit our new website www.babylonshakes.com or click the ‘shop now’ button to be redirected to the site. Thank you for continuing to support original music!”

Of note, Babylon Shakes frontman Chris Clark‘s previous band Last Call Messiahs released their self-titled four song EP back in 2014 and later released a full-length album titled Sermons Of Debauchery in 2016 that included the four songs from the debut EP.

Sleaze Roxx stated as follows in its review of the EP Exile To The Velveteen Lounge Vol One: “I first heard Babylon Shakes‘ debut EP after picking it up at the M-Pre Party in Columbus, Maryland, USA back in early May and really enjoyed it. Unfortunately, I ended up misplacing the EP along with a bunch of other new releases when I subsequently switched jobs and had to move part of my CD collection. After finally locating the box which contained the stack of CDs in question, I put Babylon Shakes‘ debut EP and remembered just how good the album is. There really isn’t one weak track on the album but at the same time, I don’t think there is one song head above the shoulders over the others meaning in my eyes, the group doesn’t yet have its signature or anthem song. Babylon Shakes are very good at letting the music breathe in that once they have a good melody or guitar riff, they will just ride that baby out such as on “Silver Tongue Devil.” The old school references are quite evident with the intro to the debut single “Velveteen Libertine” sounding like an old vinyl recording before the song really kicks in.”