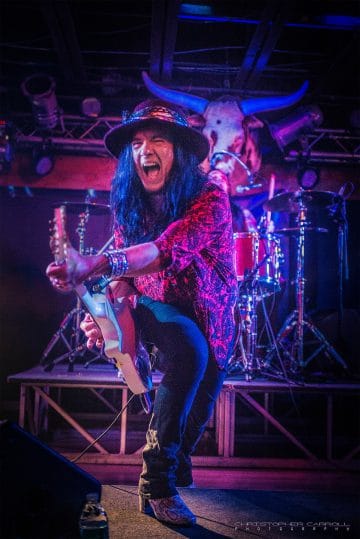 Babylon Shakes lead vocalist and guitarist Chris Clark was recently interviewed by Josh Smith of Hair Band Heaven and spoke about the group’s upcoming debut five-song EP Exile To The Velveteen Lounge Vol 1, which will be released on April 20, 2018.

Clark was asked whether the band was applying on releasing a full-length album to which the singer replied (with slight edits): “Our plan right now is release two five-song EPs, one on April 20 and the other sometime in August- both available on CD and digital and then in late fall have all ten songs available as a full length vinyl record. It will also be available on CD and digital. “Exile To The Velveteen Lounge Vol 1 & 2“.”

In terms of how Babylon Shakes began, Clark advised: “Babylon Shakes formed back in July of last year when I met Jeff (Mortimer) at (ironically enough) a Faster Pussycat show in Baltimore. It was also my previous band’s last show and we struck up a conversation at the after party and we really hit it off. We corresponded through social media and I sent him some demos that I had been working on. I told him I really wanted a sleazy throwback sound, really blues based and pure rock and roll and he was all about it. He brought in Gary (Jordan) to play bass and the three of us got together in September to jam. Those two guys are a monster rhythm section and have played together for several years. When we all hit the first few chords of “Sunset Striptease”, it was pure magic. We have been going ninety miles per hour ever since. We rehearse at Gary‘s house in essentially his man cave or as we call it now- the Babylon Bar. We have recorded there now with our own gear and just have a blast together!”

You can read the entire interview with Chris Clark at Hair Band Heaven.