Vintage sleaze rockers Babylon Shakes and will be appearing at the inaugural Rocklanta Festival in Atlanta, Georgia, USA on March 29-30, 2019. The group’s frontman Chris Clark started a segment called “Stories Behind The Songs” with respect to the tracks on the band’s recently released debut full-length album Exile To The Velveteen Lounge. 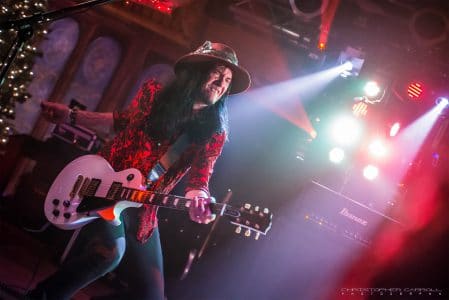 This week- No Pictures Please

No Pictures Please- As my guys will tell you, this is currently my favorite track and has been for a while now. This song just has that catchy hook and toe-tapping rhythm. Great backing vocals that almost make it soulful. I had the song title in my head and formed the chorus around the main riff of the song. “Smile for the camera”. Yes I was totally channeling the Quireboys, Faces, Dogs D’Amour. I just kept thinking about what it would be like to NOT want your picture taken? Especially in the heyday of social media. I kept seeing this image of a model in sunglasses, leaving a party in the middle of the night- shielding her face from the army of paparazzi.

What’s the other end of the spectrum like? I also thought about all those photos in the old music magazines of my favorite artists at after parties- drink in hand, cigarette dangling from lips. “is that what life is really like for them? A constant party? What do their moms think about this?” For the verses I wrote a narrative about a party girl who’s trying to make it as a model/actress and suddenly finds herself in the spotlight. She’s left behind her small town to make it in Hollywood and is trying to cling to some bit of anonymity. It’s the sleaze rock version of “Fallen Angel”. Sort of a “be careful what you wish for” type of story. I love the guitar solo and how it tips a hat to “Hot Legs”. Nothing fancy. Just tastefully coy. Jeff came up with the “woo hoos” in the chorus parts and Christopher Carroll and Gary‘s wife Marcy Jordan are singing those beautiful background vocals. It’s kind of the sister song to “Velveteen Libertine”.”