Vintage sleaze rockers Babylon Shakes frontman Chris Clark continues his weekly segment of Stories Behind The Songs for the tracks from the debut full-length album Exile To The Velveteen Lounge, which was released via HighVolMusic on February 1, 2019.

The following message was posted on Clark‘s Facebook page yesterday: 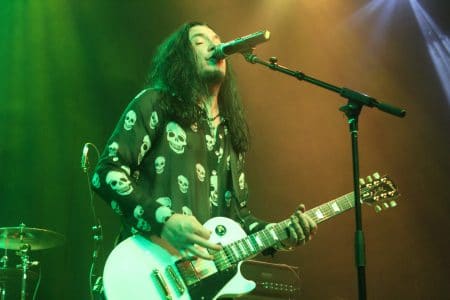 This week- Makin’ A Million

Makin’ A Million- So with this song, the guitar riff came first-the massive chorus riff. I had it for a while and tried putting it with other songs but it just wasn’t right. It needed a big idea. A really good story and something strong and relatable. As a band, we were still getting to know each other and we spent a lot of time hanging out, jamming and shooting the breeze. We were still riding a high from our debut show and were always talking about the state of the industry. What’s left out there in the tumbleweeds of what used to be the music industry? We kept going back to this idea that there is just a tiny percentage of artists who are making it, while everyone else is struggling. Like a huge imbalance. There’s the 1% and then theres the rest of us. One in a million to be making a million. I kept thinking “wow, your’e either makin’ a million, or you’re sweeping the floor”. We kept going on about how unrealistic it would be in today’s world for a rock band to be wined and dined by a major record label like say Aerosmith were in the early 70’s. I started writing these almost cliched verses about a “Mr. Big” who is on the trail of a hardworking band and how he courts them with big promises, drugs, money and women. Now we really had something. Now it sounded like an Aerosmith song blasting out of ’77 Camaro on a bright summer day. It was everyones favorite song for a long time. We had a blast recording it and playing it live. “Welcome to the high life / where the fun never ends / you’re either makin’ a million / or in the bargain bin”. We open our set every night with this one and it just kills.”