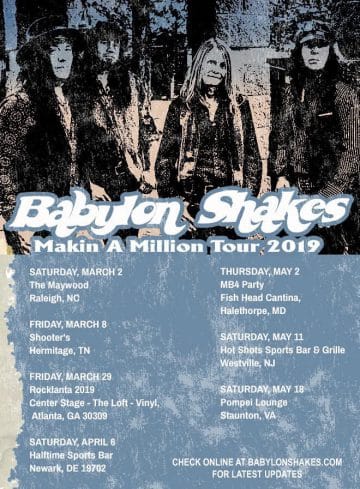 Vintage sleaze rockers Babylon Shakes consisting of Chris Clark on lead vocals and guitar, Gary Jordan on guitar, Jeff Mortimer on drums and David Elmore on bass are about to embark on a seven city tour of the USA dubbed the Makin A Million Tour 2019 in support of their debut full-length album Exile To The Velveteen Lounge, which was released via HighVolMusic on February 1, 2019.

Sleaze Roxx stated the following in its review of Babylon Shakes‘ debut EP Exile To The Velveteen Lounge Vol. I:

“There really isn’t one weak track on the album but at the same time, I don’t think there is one song head above the shoulders over the others meaning in my eyes, the group doesn’t yet have its signature or anthem song. Babylon Shakes are very good at letting the music breathe in that once they have a good melody or guitar riff, they will just ride that baby out such as on “Silver Tongue Devil.” The old school references are quite evident with the intro to the debut single “Velveteen Libertine” sounding like an old vinyl recording before the song really kicks in.

At the end of the day, Babylon Shakes‘ debut EP reminds me a lot of what Greta Van Fleet are doing in terms of sound. Greta Van Fleet have become a seemingly overnight sensation with their very Led Zeppelin like sounding songs. Babylon Shakes are borrowing heavily from the past (hence the term “vintage sleaze”) and are essentially making everything old new again just like Greta Van Fleet.”