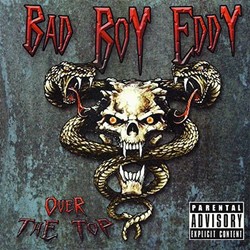 California rockers Bad Boy Eddy have just released ‘Over The Top’ through Demon Doll Records. The ten track disc is now availabe for purchase at demondollrecords.com/bad_boy_eddy.

‘Wow’ is really the only word that comes to mind when listening to this disc. Bad Boy Eddy absolutely hammers it and every aspect that an ’80s rock lover could ever ask for is here. This CD will take you back, and I mean way back to the golden days of hair metal at its peak. Everything about the music is impeccable. The songs are smashes — just check out “Rad Ruby”, “Maker of Dreams” and “Super Sonic Freak” (to name a few).

Its hard to imagine this album could be written and recorded in this era. We hear a little bit of everything here, you could throw Kix, the Scorpions, Stryper, Dio, Dokken and many more in a blender and still not nail it any better than Bad Boy Eddy did. The boys aren’t joking when they called this record ‘Over The Top’. The vocals, guitars, bass and drums — all of it is nothing less then incredible.

Not much more we can say at this point, as Aerosmith once said “Let the Music Do the Talking” — and believe us, Bad Boy Eddy’s ‘Over The Top’ does the talking (and a whole lot more)!