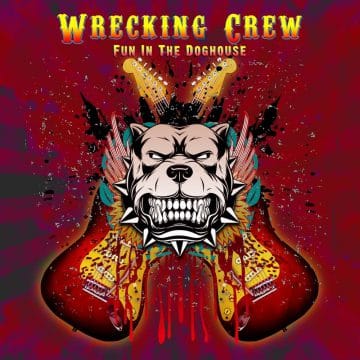 Melodic Hardrock lists Wrecking Crew‘s band members as Dave Wilkins (lead vocals), Brent Dehn (guitar), David Anthony Reynolds (bass) and Gary Synnerdahl (drums) and describes the group’s profile as follows (with slight edits): “Hard to find nowadays album from this Aussie pub rock band of the 90’s released in 1993 from Trafalgar Records. “Fun In The Doghouse” is the band’s only work with some great b-sides on their singles. The album is produced by Kevin Shirley, a well known music producer and mixer for many artists such as the bands Journey, Iron Maiden, Rush, Led Zeppelin, Joe Bonamassa, Dream Theater, HIM, Mr. Big and Europe. Excellent song writing and guitar parts blend with some funky parts that worth the search. With the end of the band, the original member formed the band “Utopian Babies”.”