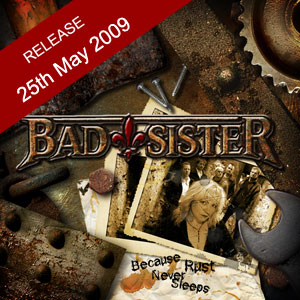 BAD SISTER TO RELEASE ‘BECAUSE RUST NEVER SLEEPS’ ON MAY 25TH:

“We’re so happy and we think, that we’ve made a great record”, the band’s frontgirl SuzieLohmar says. It took a long time to get the band together after all these years, to write goodsongs and to work in the studio – but now BAD SISTER is back again. “Because RustNever Sleeps” contains 13 songs – Classic Rock, good old AOR and Melodic Hard Rockat its best. “We wanted to record music, that feels like the 80s and sounds like today”,Suzie says.

The first single is called “Surrender” – a smashing hard rock hit in pure 80s style. The musicvideo for the song was shot at legendary Reeperbahn, the famous red light district ofHamburg.