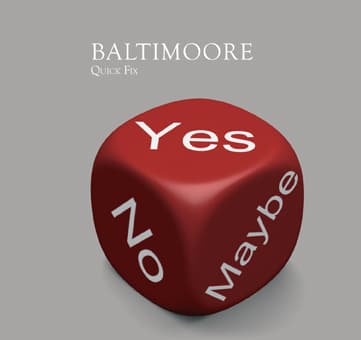 Swedish outfit BALTIMOORE are back on May 15th 2009 with their 11th album serving up a “QUICK FIX” of their unique brand of classic rock vibes and modern day mentality. Led by the distinctive trademark vocals of Bjorn Lodin, a voice which is home to natural warmth and distortion, this newly formed incarnation of Baltimoore provides ten new tracks of musicality and melody within a bed rock of rhythm and dynamics.

Written, engineered and produced by Lodin at his home studio – “the only thinkable method” – the new album sees a re-acquaintance with Hammond Organist orjan Fernkvist whose vintage tones bring back a more melodic edge after the last three dual guitar releases. In addition a new rhythm section of bassist Bjorn Lundkvist and drummer Robban Back (both from BALLS – the short lived 2008 band involving Lodin) knit closely with a talented newcomer on guitar in the guise of Emanuel Hedberg. On his new band line-up Lodin comments, “These guys know their instruments very well and on this record they all get to play them and shine. Having new players is essential to find new sounds and try different things. I wish I could find a singer who would do my part!”

The albums origins date back to early 2008 with a couple of tracks being unrealised working ideas for what was to become the BALLS “Chameleon” album. “I pretty much started writing right after BALLS had had its premature ejaculation in December 08. As always the goal was just to make music, I need to make music! I knew I wanted organ in the line-up again so in came orjan, we started joggling some ideas around and in January 09 the line up was complete. I had an idea of having a lap steel player instead of guitar, but schedules didn’t work out. Instead Emanuel came on board and he had a playing style that helped shape the tracks to their final state In mid February we had all 10 songs ready and started recording .”

Lyrically the album sees Bjorn deliver numerous stories through the eyes of different characters, “I dwell on the same stuff as before only here I think I “get to the point” a bit clearer and faster. “Quick Fix” is about making fast decisions rather than making things too complicated and getting stuck. My characters are not always my inner thoughts and beliefs but I’m quite sure they do the trick. They’re all about making decisions. Some of them are easy to relate to and decide whether you agree with what I’m singing or not, hopefully some of them will start the listener thinking about stuff you should have an answer to or opinion of.”

On the album overall Lodin contemplates, “Well, I think I’ve come a bit closer to where I really wanna be music wise. I’ve grown in all slots I’ve been involved with – songwriter/engineer/producer. I get this feeling after every release and I think that’s how it’s supposed to be. This is my best effort so far. I’m already planning for how the next album will sound and I hope I feel the same way about that one after its done”.

“Quick Fix” sees Baltimoore in the 20th year of its lifespan deliver its eleventh album – a fresh inspired album, which also sees the added bonus of instrumental versions of each track. What may seem a bizarre idea Bjorn spells out his rationale as “I feel these tracks stand up just fine in terms of purely musical composition. Plus I’m really hoping someone will come up with new vocal melodies and lyrics or at least use them to record their own lovely voices. See you on YouTube?!”