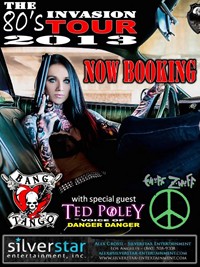 The ’80s Invasion Tour featuring Bang Tango, Enuff Z’Nuff and Danger Danger frontman Ted Poley is set to kick off in August. The initial dates of the 2013 ’80s Invasion Tour have been announced with additional dates and cities to be named later.

Ted Poley showed his excitement for the tour by stating, “This is huge! My first real USA (and Canada) big ass tour bus tour in over 20 years and I couldn’t be happier than to be tagging along with my brothers in Bang Tango and Enuff Z’Nuff! Yes, (guitarist) Maz Mazza will be with me. Fuck yeah, get ready to rock!”

Enuff Z’Nuff will be performing without frontman Donnie Vie who recently left the band. Taking his place, and returning to the band after a several year hiatus, is Johnny Monaco. Vie wishes the band well however by saying, “I just want to say, go get ’em Johnny Monaco, as he kicks off his return to the mic in Enuff Z’Nuff. I’ve gone as far as I can go with that situation and I’m glad the songs will still be getting out there to those who wanna see and hear ’em. I can’t think of a better guy to sing ’em (besides me of course). Best of luck to you and the rest of ’em.”