Bang Tango rhythm guitarist and the Attack Of Life: The Bang Tango Movie creator Drew Fortier has launched Drew Fortier Productions to offer his video shooting and editing skills to the public. 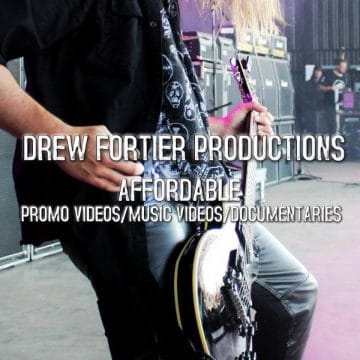 “For all the years that I have been shooting & editing promo videos/ music videos/documentaries etc., I have only done it for close friends and friends of friends. Now I have taken the next step and am providing my services publicly. Feel free to inquire about rates and give the page a “like” and pass it around if you wish.”

Back in September 2015, Fortier explained to Sleaze Roxx in an interview that he did not have any video filming experience when he started filming Attack Of Life: The Bang Tango Movie but after four years of editing the video footage for the movie, he gained invaluable experience. Fortier stated:

“So early on, I realized I was okay at shooting stuff with the camera. Just figured that I would shoot as many things and interviews as I can and just give it to the band to give to someone to edit together something like a documentary (laughs). Early on, since I had all this footage, they asked if I could edit together a music video for them which turned out to be the “Live Life” video. It was my first attempt ever at editing and once again, I had no clue what the fuck I was doing (laughs)! The band ended up loving it! It had some great humour in it. Their booking agent especially loved it and since then, has had me do promo videos for all the bands on his roster, which has been a flattering experience to work with such influential and great bands. I ended up doing video work for Mark Knight — a few music videos for him. I ended up doing like five Bang Tango videos. And still… I had no clue what the fuck I was doing (laughs).

So at the end of shooting, I ended up with over 400 hours of footage. I sat down one day and attempted to go through everything to try and put a rough cut together and it almost made my brain explode. I was learning how to do all this literally on the fly and by trial and error. I let the footage sit for the longest time and just started cutting together trailers for the movie every couple of months just to show that something was still happening with it. Finally, I decided to put my sanity aside for about six months and sat down and edited together what would be the rough cut of the movie. Edited the whole thing myself. I do NOT recommend anyone to try and do this. I definitely died a little bit on the inside and burnt out the part of my brain that was once capable of simple math (laughs).

But the rough cut was insanely dark and mean toned. It was a little bit too brutal on everybody involved. So I recut it, shortened it up, tightened it up and went through everything with a fine tooth comb and finally called it finished. It was a strange moment, finishing something like that. It took four years of my life to make and probably shaved off 12 years of my life in the end (laughs). But I showed everyone the final cut and everyone absolutely loved it. It was a super strange and flattering moment, because once again, this guy had no clue what the fuck he was doing (laughs). But everyone was flipping out over how well the story came out.

So throughout that whole four year process, I learned how to make a movie as well as how NOT to make a movie. Triumphantly — in the end — I finally learned what the fuck I was doing (laughs).”