A day after Sleaze Roxx noticed that Bang Tango had posted group photos that didn’t include lead guitarist Rowan Robertson and rhythm guitarist Drew Fortier, and after finding out from Fortier that he didn’t think that he was in the line-up anymore, Bang Tango have advised that Robertson‘s spot in the band is still available to him. Bang Tango have also 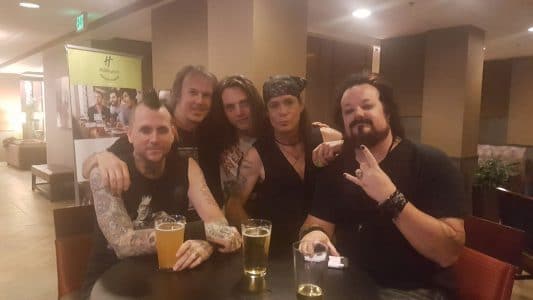 advised that Fortier remains a part of the band but not an actual “official” member. Fortier will be releasing his autobiography Dark, Depressing, and Hilarious on August 24th and he previously advised Sleaze Roxx that the book will cover his “touch and go relationship with Bang Tango.”

“wello all. Just wanted to let you all know how its going in the Bang Tango camp. First, our amazing agents are putting together shows for us as we speak and we can’t wait to get back out there. Its been too long. Second, in reference to a recent internet article about the guitar player slot in BT. Rowan is very much our guitar player. He has been very busy with his residency in Las Vegas and his schedule is very grueling and takes up most of the year, especially the summer. We don’t blame him. He’s doing very well out there and we are very proud of Rowan. In the mean time we have an amazing guitar player to fill in for Rowan. Steve Favela has been playing with Lance in his Phoenix based band, Color of Chaos and is sounding great. None of us have heard from Rowan in a while but we know he’s a busy man. His slot in Bang Tango is always waiting for him. He is family.

Third, on the status of Drew. Drew is also family and he does shows and sometimes doesn’t do shows. Its hard to make him an official member when we don’t know what shows he is doing or not doing. We added his photo to the New Years Eve show and he didn’t show. The most recent Bang Tango collage promo we released was just to update the page. Drew is our Huge McDonald of Bon Jovi. Huge is never in any photos.

? all kidding aside, we thank all of you for your amazing support for 29 years and we are looking to keep things rolling, hopefully drama free. Theres enough drama in this world we don’t need any more. Thank you again and we will see you out there on the road.”