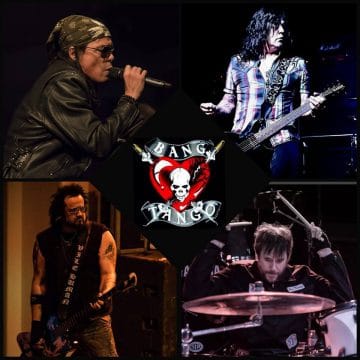 tour dates. Favela was dubbed by Bang Tango as a temporary fill-in replacement for lead guitarist Rowan Robertson (ex-Dio, DC4) back in May 2018 while the latter was busy with a Las Vegas residency.

Fortier first officially played with the group at the M3 Rock Festival in Columbus, Maryland, USA back in May 2015 before being  left out of the band, rejoining in August 2017 and being now seemingly left out once again.

Sleaze Roxx reached out to Fortier to inquire about his status in the band. Fortier replied:

“As far as Rowan and myself, I won’t speak for Rowan but I’ll just say that what you see is what you’re getting as far as Bang Tango. Aside from my consistent contact with Rowan, I haven’t spoken to anyone else in the band in quite some time but like Rowan, I have been busy with different and more personally fruitful endeavors such as the Zen From Mars record, The Chuck Mosley Movie, Flipp, and a book about my under the radar career so far, which I will be officially announcing soon and actually covers my whole touch and go relationship with Bang Tango and how I became involved with them. I will always be thankful for the band for everything they have done for me, after all if it weren’t for them, I wouldn’t be able to do all the stuff I’ve been able to do. They will always have a huge chunk of my heart.”

Sleaze Roxx also reached out to Robertson who suggested that Leste be the one to comment on his status within the band.