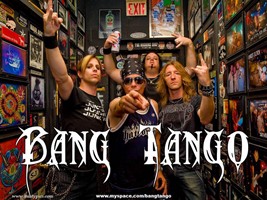 Bang Tango is getting close to finishing their new studio album, the band’s first since 2006’s ‘From The Hip’. The band — consisting of Joe Leste (vocals), Lance Eric (bass), Scott LaFlamme (guitar), and Trent Anderson (drums) — have been working with producers Kevin Rodgers and Daniel Salcido and hope to have the new album out by September.

Drummer Trent Anderson tells Sleaze Roxx, “The new album is almost done, the tracking is complete, it is being edited, mixed, and then mastered. We are looking to release it sometime in September with a label called 78 Productions, and they have given us full control to do whatever is needed to get it done and out.

The producers Kevin (karp) Rodgers and Daniel Salcido were awesome. They brought in a vocal coach for Joe LeSte, her name is Lisa Beery, and she reallyhelped bring out an amazing performance from Joe.

The songs have a bit of influence from the 1st release, as well as some Rolling Stones influence, and a tiny bit of Beautiful Creatures on it. (Former member) Alex Grossi co-wrote a song on the album called “Suck It Up”.

All in all, we’re not trying to change the world with this album — we hope all the old fans, and the new ones, like the record. We do understandthere will always be people judging and comparing it to the original albums, but we just wanted to do another CD. We had some really great ideasand we want to give something to all our fans, friends and family that have been coming out to our shows lately, the crowds have been really good.”