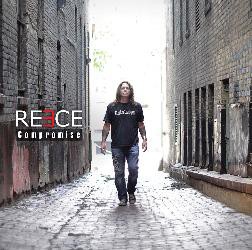 American singer David Reece has been sharing his bluesy rock voice with the world since the late 1980s and October 25th will see the release of his second solo album ‘Compromise’.

Reece’s most notable early releases were Accept’s 1989 album ‘Eat The Heat’ and Bangalore Choir’s 1992 classic ‘On Target’, closely followed by LPs with Sircle Of Silence and Stream. Disillusioned with a floundering rock scene, Reece took a hiatus from music in the mid 1990s to follow other pursuits and dreams.

Returning in 2008 with the critically acclaimed Gypsy Rose album ‘Another World’, David Reece’s debut solo album ‘Universal Language’ surfaced in 2009, The culmination of many years writing and performing, the album featured musicians including Andy Susemihl (U.D.O.), and fine songs such as the bombastic “Rescue Me”, the huge “We Were Alive”, the soaring ballad “Queen Of My Dreams” and the distinctly leftfield “Yellow” — a definite song for fans of Colonel Mustard. Sleaze Roxx stated the CD “represents David Reece expanding his horizons without turning his back on his past, and is a welcome addition to his recording legacy.”

The album ‘Cadence’ in 2010 saw the first brand new Bangalore Choir material in 18 years. 2011 marked Reece’s return to working with Gypsy Rose founder Martin Kronlund, this time under the moniker Reece Kronlund, releasing an album simply called ‘Solid’. The album also marked Reece’s first ventures with lyricist Jon Wilde, who has since co-written on the third Bangalore Choir album ‘Metaphor’ released in 2012 and now on this — David Reece’s second solo album ‘Compromise’, an apt title given the amount of compromise we all face in our lives, be it working in the music industry or going about our daily grind.

The result is a peach of an album with a wide range of songs from sublime ballads, “Someone Beautiful” (with music by renowned writers Tom and James Martin), to metal masterpieces, “End Of It All”, stomping rockers, “Where My Heart Belongs”, and more. Reece, with influences as diverse as Ian Gillan, Paul Rodgers and Chris Cornell, loves tackling a variety of styles and one listen will tell you he has the voice to pull it off. And with musicians the calibre of those here, and lyrics boasting a darn sight more intelligence than your standard cliched rock fair, he has the firepower to back him up all the way into classic album territory.