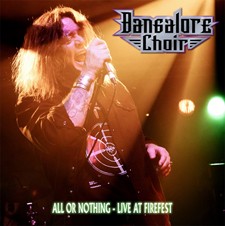 Bangalore Choir Releases ‘All Or Nothing’ Live Album

Bangalore Choir have released ‘All Or Nothing – Live At Firefest’, the band’s first live album capturing their 2010 appearance at the UK Firefest festival. As with all Firefest releases, ‘All Or Nothing’ is limited to 1000 copies and once they are gone, they are gone. The official release date of the CD was June 6th and can be ordered at www.thefirefest.com.

Bangalore Choir played the UK for the first time in their history, and proceeded to blow Rock City apart. Led by the barefoot David Reece, ably abetted by guitarist Curt Mitchell, bassist Danny Greenberg, second guitarist Andy Susmihl and drummer Hans in t’Zandt, Bangalore Choir garnered such a reception that prompted a very emotional David Reece to shed a little tear after the performance.

Centred mainly around the genre classic ‘On Target’ featuring a raft of immediately recognisable anthems such as ‘Freight Train Rollin’, ‘Loaded Gun’, ‘Angel in Black’, ‘Slipping Away’, ‘If the Good Die Young’ and ‘All or Nothin’, there was also room for the magnificently delivered ‘Martyr’ and ‘Power Trippin’ from the sophomore album ‘Cadence’.

Contained here are the twelve tracks that not only cemented Bangalore Choir’s place in Firefest folklore, but opened them up to an entire new audience with the sheer power and panache of their live delivery impressing all, bar none.