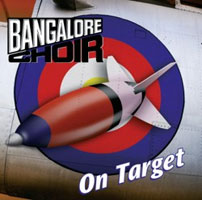 In 1990 David Reece (ex ACCEPT) and drummer Rusty Miller were ready to form a heavy but melodic Rock n Roll band named BANGALORE CHOIR in Los Angeles, USA. A place to look for great guitar players was the GIT in Hollywood, and so John Kirk and Danny Greenberg were found. Sharing the same musical vision the writing began. First songs were ‘All or Nothin’ and ‘Slippin Away’, both on the ‘On Target’ release.

While rehearsing, John mentioned the guitarist Curt Mitchell who had worked with a previous group out of Reno, NV called RAZORMAID. Rusty Miller and the group parted ways, new drummer Darek Thomas Cava (ex BRUNETTE) replaced him. After a couple shows the band had offers from almost every label in town and settled with Giant Records and recorded ‘On Target’ released 1991/1992.

April 23, 2010 sees the re-issues of this record on AOR Heaven (www.metalheaven.net). Re-mastered by Martin Kronlund in Sweden, this album now also includes a video clip of the song “Loaded Gun” as a bonus. BANGALORE CHOIR are currently record a new album which will be released later this year on the same label.