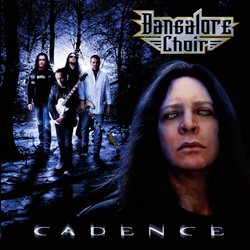 Reunited rockers Bangalore Choir have unveiled the artwork to ‘Cadence’, their first album since 1992’s ‘On Target’. ‘Cadence’ will be released on September 23rd through Metal Heaven Records — www.metalheaven.net — the same label that reissued ‘On Target’ earlier this year and put out Bagalore Choir singer David Reece’s 2009 solo album ‘Universal Language’.

News of a Bangalore Choir reunion first surfaced in 2008, only to have the project shelved later that year. At the time David Reece told Sleaze Roxx that there were many factors surrounding the failed reunion. “Some were illnesses and honestly I’m not about drama and it seems like the drama beast was awakened”, said Reece, “That’s the thing about rock-n-roll, the focus is and always should be the music. So we all felt it was best to call it a day for now.” Reece then focused on his work with Gypsy Rose and his solo album.

Two years later recording for the band’s first release in 18 years is completed.