Great news for Banshee fans as the group’s third studio album Take ‘Em By Storm, which was originally released back in 1993,  has been reissued by NoLifeTilMetal Records with a release date of January 17, 2020. 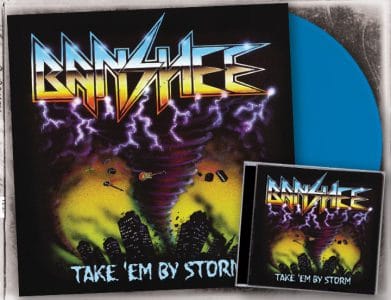 The following press release was posted in part by the Bill Roxx Page via Facebook yesterday (with slight edits):

“Banshee are a heavy metal band from the Midwest, USA, formed in the spring of 1986 by vocalist Tommy Lee, bassist Chuck Hoplkins (both ex-Lick), drummer Kent Burnham (ex-Crypt Keeper) and extraordinary guitarist Terry Dunn of Kansas City-based Frodo. By the fall of 1986, they released their first EP entitled Cry In The Night. Hopkins left shortly thereafter to pursue other projects in L.A. and was quickly replaced by local Kansas City bassist Bill Westfall. In 1988, Metal Blade Records re-released Cry In The Night and included the song “We Want You” on the Metal Massacre 9 compilation. The album was a strong, straight-forward and melodic heavy metal album with big hooks, strong vocals and smoking guitar work. The momentum from the EP gained the band immediate major label attention. After signing with Atlantic Records in 1989, the band began recording at the infamous Record Plant Studios for their first full length album “Race Against Time” (released on September 15, 1989).

“Race Against Time” was slightly more melodic and commercial than the more straight-forward heavy metal of “Cry In the Night“. Though the band continued to gain momentum with fans in the heavy metal world the band soon parted ways with Atlantic Records and within a couple years, began recording their third full-length album “Take ‘Em By Storm“. The album was self-released by the band in 1993 on their own Snowblind Productions. The album quickly sold out of print and circulation with original copies selling on auction sites at premium prices.

NoLifeTilMetal Records is excited to bring to you a strictly limited edition vinyl and CD reissue of “Take ‘Em By Storm“. The CD is limited to 300 copies and contains an updated 12-page booklet with exclusive photos and liner notes. The vinyl release is limited to 50 copies on a translucent blue vinyl and only 250 on black vinyl. The album has been masterfully remastered by Rob Colwell of Bombworks Sound and sounds better than it ever has.

Get your order in early as the first 50 pre orders will include a free limited edition drink coaster!

Banshee – Take Em By Story is finally available again on CD and for the first time of VINYL! I stated black vinyl only but there are actually 50 BLUE VINYLTo…