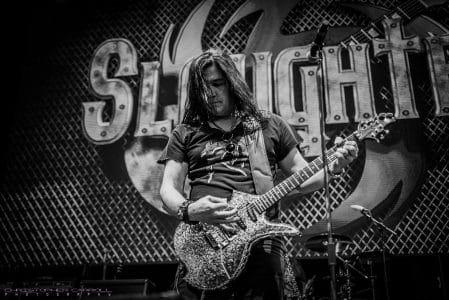 Mark Slaughter was asked how he views his musical legacy to which he replied:

“Well, I think that you’re a storyteller and first and foremost. If you’re the writer, which I am a part of and all that it’s, the bottom line is you’re telling a story or you’re trying to reflect the times of the listener. We always focused on the songs and I don’t really have, like one record that I, I have great memories of the first record when we were doing it. The second record was … We took one month after touring for a year and a half and then we started on writing the Wildlife record, and that was, there was no rest. I mean, we didn’t even stop. There’s, that and that, and I think that we came out to be a live band when the band really essentially never played a show until we opened for Kiss. The first show that we did was actually in front of a very large crowd and we’ve all played in our local bands and I did the Vinnie Vincent thing prior, but the band Slaughter never even played a club date before we did the arena shows.”

After Dean noted that it was like a baptism by fire, the singer added: “Oh. You’re not kidding, baptism by fire, and even for me as a musician going from a guitar teacher to all of a sudden being the lead singer, I literally was teaching guitar and a month later I was fronting the Vinnie Vincent Invasion with just a microphone. That was baptism by fire because I really wasn’t my expertise, so to speak. Yeah. We have, but it’s been great, man. I love making music and like yourself, I’m a huge music fan of all the things that moved me. You know?”

You can read the rest of the interview with Mark Slaughter by media journalist Mark Dean at Madness To Creation‘s website.