Tesla bassist Brian Wheat was recently interviewed by Bode James for the Rock N Roll Icons podcast. Wheat was promoting his autobiography Son of A Milkman: My Crazy Life with Tesla, which was co-written with Chris Epting and was released via Post Hill Press on December 15, 2020. 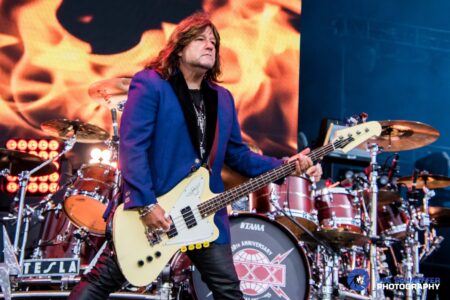 On Tesla‘s inactivity during the Covid pandemic, Wheat indicated (as transcribed by the Roll N Roll Icons podcast):

“The reason behind it is a combo of a bunch of things. We’re scattered all over the country for one thing, we’re older so travelling and getting sick isn’t a high priority of things that we want to have happen. We’ve (Tesla) been hitting it pretty hard for the last 20 years without a break, so there’s a break factor that did come in. More important than that is that we don’t live in the same town any more. We’re not the kind of band that makes a record with one guy in New York, one guy in Tennessee and two guys in California. We just don’t do that. We have to be all in a room in close proximity to each other to make Tesla music.”

In terms of writing Tesla hits, Wheat stated: “Some come easy and some took a long &me. Something like “What You Give” took two albums to finally come to life, and something like “Modern Day Cowboy” came about fairly quickly. It just depends on the song.”

With respect to songwriting and getting older, Wheat indicated: “It’s changed because I’ve developed more skills. I’ve learned how to write songs better than I did when I was young. It’s like going to the gym for 30 years. All of a sudden you’ve got your technique down, you know how to get muscles if you want muscles. When you first go there you don’t know shit and you’ll try anything. That’s kind of how I equate it.”

You can listen to the interview with Brian Wheat on the Rock N Roll Icons podcast below: