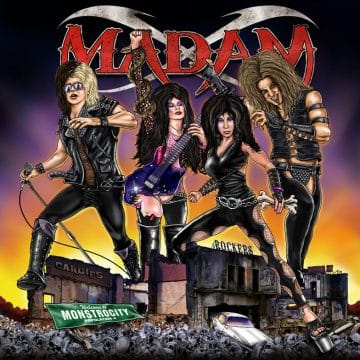 Doliber provided an update on what Madam X are up to as he indicated (with slight edits): “As I do the interview, we are in the studio working on a new Madam X record. We are doing something on this record that has never been done before. After the release of the record, I think you will see other artists and bands doing the same thing. I can’t go into details because I don’t want to tip our hat before the release of the record. You will have to wait and see.”

In terms of his favorite moments and shows, Doliber stated: “Sweden Rock Festival was and is an amazing experience. We did 2014 and 2018 and WOW, what a blast. Also the ECT show in England. That was a live to air rock n roll T.V. show. When they count down 3, 2, 1 and point, we were live to 17 million households. At that time, there were only four T.V. stations in the UK and we were on in prime time. What a giant thrill that was. Watch it on YouTube. It’s pretty damn good. That happened around the mid ’80s. Also the Monsters of Rock Cruise is killer. I love playing and being on stage with these guys. It’s like a flying by the seat of your pants thrill, never boring. Back in the ’80s at a Country Club show, in the audience was Gene Simmons, Tony Iommi, Ted Nugent, Tommy Lee, Heather Locklear and others who are challenging my brain right now. For those that are not familiar with the Country Club, it was a 2,000 capacity theater in Reseda Valley in California. What a great room that was. Also the Cardi‘s chain of clubs in the south west always had incredible crowds. Rockers in Phoenix Arizona was a very cool room. Rob Halford of Judas Priest lived in the area and would sit in with the band. Rob would come up on stage and we would end up doing 90 minutes of Judas Priest with Bret and Rob sharing vocals. Great memories. I’m looking forward to creating more.”

You can the rest of the interview with Chris Doliber on All Music/All Bands‘ Facebook page.