It seems that the classic AC/DC line-up post-Bon Scott and minus Malcolm Young is back together. In August 2018, lead guitarist Angus Young, rhythm guitarist Stevie Young, singer Brian Johnson and drummer Phil Rudd were each spotted and/or photographed at various instances while the band was reportedly recording a new studio album at its usual recording spot 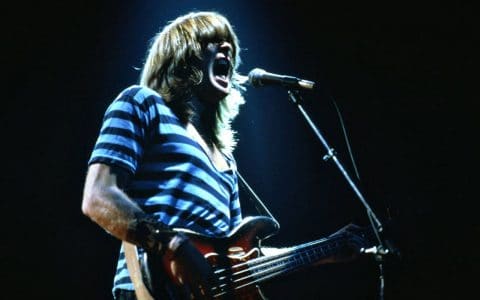 at The Warehouse Studio in Vancouver, British Columbia, Canada.

The only holdout or question mark appeared to be bassist Cliff Williams but a photo was tweeted today on AC/DC Rides On‘s Twitter account of Williams with Johnson in Vancouver with the following caption:

“Me and the boys out to have some fun.. The final piece of the jigsaw falls into place. Cliff and Brian in Vancouver. looking good, lads. #acdc2019″

Wikipedia states the following in part about Williams:

“Clifford Williams (born 14 December 1949) is an English musician who was a member of the Australian hard rock band AC/DC as their bassist and backing vocalist from 1977 to 2016. He had started his professional music career in 1967 and was previously in the British groups Home and Bandit. His first studio album with AC/DC was Powerage in 1978. The band, including Williams, was inducted into the American Rock and Roll Hall of Fame in 2003. Williams‘ side projects, while a member of AC/DC, include benefit concerts and playing with Emir & Frozen Camels on their album San (2002) and a European tour. In 2016, Williams announced his retirement from the music industry after AC/DC‘s Rock or Bust World Tour.” 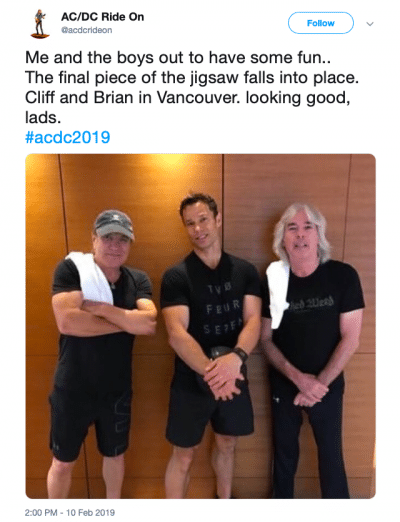