Sheeley advised (as transcribed by Rockpages with slight edits): “I didn’t join Nightshade until later after they put out albums. When Jonathan and Rick left the band, I followed a different direction. When they left the band – most people don’t know that- Floyd Rose, Gary Thompson and me found a new singer that we thought was going to be the singer in Q5. His name was Marty and he came from Vancouver, Canada. He had a great voice, but it was a little bit too smooth for a heavy metal type of singer. We wrote an album worth of songs and recorded them and they sounded fantastic. To this day I listen to them and go “these are all hit songs”. There was a reason it never came out! At that time Floyd had a little bit of a spat, or disagreement with Eddie Van Halen. Eddie had claimed that he invented something on the guitar tremolo system that Floyd invented and it wasn’t invented. So, Floyd got upset and Eddie had to say in a guitar magazine that he made a mistake and he didn’t invent that. So, Eddie wasn’t very happy with Floyd.

To make a long story sort we recorded these songs, I gave them to a friend that I had at Warner Brothers in Hollywood and they gave the songs to Ted Templeman, Van Halen’s producer. Ted loved the songs and he said “I wanna produce those guys”. He was listening to the tape one night in the studio and Eddie Van Halen was there with Patty Smyth, recording her solo album, and they happened to hear the tape and said “who is that?”… and I think they liked it too, but Ted told Eddie “well, that’s your friend, who invented the tremolo”. So Eddie said “No! You don’t work with them”. And that was it. That was the end of that! That really happened and it was a really sad moment for us because we thought we were on our way with something brand new.”

You can read the rest of the interview with Q5 bassist Evan Sheeley at Rockpages.

Part of Q5‘s “Biography” on their website states in part (with slight edits): 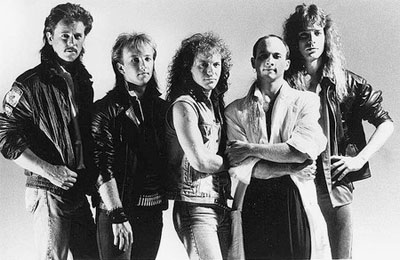 “Vocalist Jonathan K. and original guiarist Floyd Rose (inventor of the famous locking guitar tremolo system) had a vision to build the biggest and baddest hard rock / metal band to come out of the Pacific Northwest.

The two recruited former TKO members Evan Sheeley (bass), Gary Thompson (drums) and Rick Pierce (guitar) to form “Q5“, which would release one of the most influential cult-classic hard rock / heavy metal albums of the era: “Steel The Light” (1984, Music For Nations).

“Steel The Light” received widespread critical acclaim, and allowed the band the opportunity to perform alongside veteran acts such as Y&T, Twisted Sister and Lita Ford.

The buzz created by this album would plant the band firmly on the heavy metal map, and eventually lead to the band signing with Polygram/Squawk Records for its sophomore effort “When The Mirror Cracks” (1985), a decidedly different, but equally acclaimed work.

Musical and industry changes caused the band to split up in 1989.