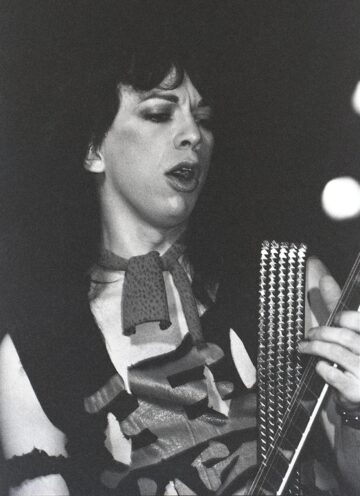 Shea played in the band Warrior with guitarist Vinnie Vincent before the latter ended up joining KISS in 1983.

Cherry Red Records, who sells an album consisting of a collection of Warrior recordings, provides the following description of the band’s beginnings with Vincent:

“The Warrior story starts in 1982 with the Boston based band New England, featuring keyboard player Jimmy Waldo, bassist Gary Shea and drummer Hirsh Gardner, and how their plans to record their fourth album with Todd Rundgren were scuppered when their guitarist, John Fannon, unexpectedly quit the group. They put the word out that they required a new singer, and as they shared management with KISS, Gene Simmons recommended an unknown Vinnie Cusano, who was then helping KISS with their “Creatures Of The Night” opus. Although KISS liked Vinnie Cusano, it was felt that his lack of height was a hindrance to joining them as a full-time replacement for Ace Frehley!

Vinnie sent New England a tape of his songs, and an audition was set-up. New England liked what they heard on Vinnie’s cassette so much that they decided to learn the whole set of songs in preparation for Cusano’s audition. The four hit it off, but it was obvious that this was a new band, soon to be christened Warrior, and not just a seamless continuation of New England. It was also agreed that the four would relocate from Massachusetts to Los Angeles, and began recording the songs that had appeared on Vinnie’s demo tape. Fergie Henrikson was brought in to allow Vinnie to concentrate more on guitar. Despite making some very good music, Warrior’s career came to an abrupt end before it had even started when Vinnie was offered the opportunity to join KISS full-time, and become Vinnie Vincent, before eventually forming Vinnie Vincent’s Invasion.”

Shea was asked about what it was like playing with Vincent to which he replied: “His problem is he can’t make up his mind on things. We’d work on a song and then the next day we would have to change it all around again. Then the third day, that song would be changed again. He would drive everybody crazy, he drove the guys in KISS crazy too. He was a good guy, but he had a lot of nervous energy. He did KISS, and then when he did his own thing he tried to be Yngwie Malmsteen and that was the wrong way to go in my opinion. He’s a great guitarist, and in Warrior he was playing more melodic like Jeff Beck or Mick Jones. All the screaming guitars and high vocals on his solos albums…. I don’t think it was as good as what we were doing.”

You can listen to the interview with Vinnie Vincent on the 80’s Glam Metalcast podcast below: