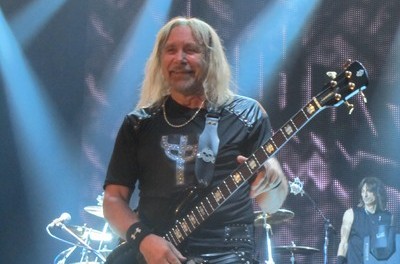 Hill was asked whether Judas Priest considered asking guitarist K.K. Downing to rejoin the group after Judas Priest guitarist Glenn Tipton announced in mid-February this year that he would not take part (fully) in the band’s upcoming tour in support of its new studio album Firepower due to suffering from Parkinson’s Disease.

Downing had expressed surprise in late February 2018 at not being asked back into the band and especially since he was still “legally” in the group.

Hill replied (see video below at 6:25 mark and as transcribed by Sleaze Roxx): “I didn’t know, really, where he was coming from with that comment. I think he just played a bit of mischief, to be honest. I mean, Ken‘s place in the band has already been taken; he’s sitting right there you know [referring to Faulkner]. It’s also two albums down the road since Nostradamus, which is the last one he played on, and is he gonna be prepared to play music from the new album you know, which he probably would not. And on top of that, he’s gonna have to learn Glenn‘s parts too. So it’s all reasons why we didn’t [ask him to return]. Apart from that, he’s been retired for nearly eight years. He hasn’t since set foot on stage as far as I know, so you know he’s hardly at the peak of his game at the moment. So, yeah, I wasn’t quite sure where he was coming from with that — I really don’t. I think it might have been just a bit of mischief.”