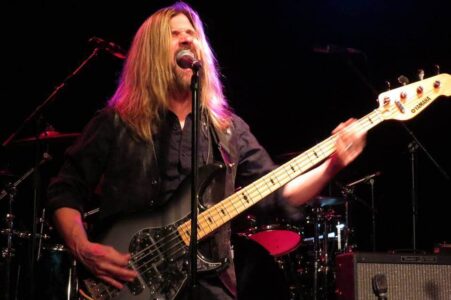 In terms of dealing as a young musician with all of the fame and fortune that White Lion achieved back in the mid ’80s to early ’90s, Lomenzo indicated (with slight edits):

“I had no idea it was going on at that time. I really didn’t, man. You’ve got to understand something. Back then, it’s not like it is now. We didn’t have cell phones, and computers, and certainly not like we do know. And certainly cable TV was a luxury, so when we hit the road, when we first started out, even after we signed to Atlantic, I think one of the first tours we did was across the country, and we were in an RV, and we had our sound man driving it. It was comfortable, it was a decent-sized RV, but we would stay at pretty cheap hotels, because we didn’t want to really spend that much money on travelling at this point, and we’d stay at hotels and there would be rabbit ears on the TV. Cathode tube. And so a lot of them didn’t have cable, and so I had no idea.

So I put a quarter in the phone, outside of the hotel. This will blow people’s minds if they think about it, and call back home and check in with my family or whoever and they’d say, “Oh my God, you guys are on TV all the time.” And we had no idea. The only clue we had was, it seemed like people kept coming out to the clubs, and the clubs started filling up pretty good across the country. Which we were used to in New York, because we were a local band, but we didn’t expect that. And so it wasn’t until, I think we started playing with bands like KISS and AC/DC and doing those bigger tours, where things changed.

But to tell you the truth, I think I was visually just a less obvious person, as far as being a famous dude, then [lead vocalist] Mike Tramp might have been, or [guitarist] Vito [Bratta]. And so I just went about my life, and really didn’t notice a big change out in the world. People didn’t… It wasn’t until much later on, like when I was in Black Label Society, and after I’d done a bunch of things like that, that people would actually call my name out in the street. So I guess, just doing it long enough, I’ve found enough of a fan base to follow what I was doing. But back then, no. And there were so many other bands then too. I’m trying to think of some of the names, but Cinderella and bands like that, and Motley Crue for God’s sake. We were a big band, but these bands were selling maybe three times more than we were, a lot faster. So we came in maybe towards the middle to the end of that run of hair bands, as they called them.”

With respect to whether the four White Lion band members were four partners or there was a split in that regard, Lomenzo stated: “It was, Mike and Vito had started the band. [Drummer] Greg [D’Angelo] and I came in later on, and so there was a partnership there but it was a limited partnership, so they basically had a lot of say about things that we were doing. Having said that, Mike was very open to all kinds of ideas. Vito a little less so, but certainly not intolerably. There were a lot of things that I wished that I could’ve contributed and tried, but it became about the dollar after a while, so I just didn’t bother after a while.

And you’ve got to understand, man. I came out of playing with Bobby [Rondinelli], and jamming with Ritchie Blackmore and all that stuff. So when I got there and we were playing straight-on pop music, again, I was adept at it and I liked it, but it wasn’t featuring, I wasn’t feeling like a featured artist in that band. I was feeling like a support artist, which I actually made a very good living doing for the rest of my life, which doesn’t bother me at all. But back then, there was a lot of songs that maybe got passed on that I would have liked to have heard the band do, for a variety of reasons.”