Armored Saint and Fates Warning bassist Joey Vera was recently interviewed by Andrew Daly for Vinyl Writer Music. Armored Saint will be touring the United States of America during the fall of 2022 as the official opening act for none other than W.A.S.P. lead by frontman Blackie Lawless. 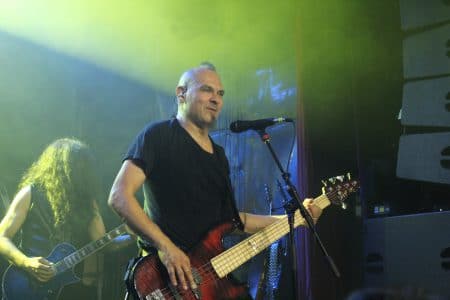 Vera was asked what led Armored Saint to disband back in 1992 to which the bassist replied (with slight edits): “The first crack was when we got dropped in 1988. Then, when Dave Prichard died in 1990, we felt like the band was truly broken. But we got back together and made Symbol of Salvation in 1991. There were high expectations for us, from the label, from management, and from ourselves. And although the record received great reviews and accolades, it was the dawn of grunge, and we got lost in that shuffle. This opened up the wounds and contributed to inner fighting. Then, John Bush got the call from Anthrax. That was it.”

In terms of what led Armored Saint to reform in 1999, Vera indicated: “In 1998, I had been writing music mostly for myself again, but it was in the metal vein. I was chatting with John one day, and he mentioned that Anthrax was going on a short hiatus because of the SOD reunion. He was worried about being bored, so I suggested he write some lyrics and help me make demos with the songs I had written. So, I gave him a few songs, and he loved all of them. We demoed a few songs, and it led to us writing about six songs or so. At that point, there was no real discussion about what we were going to do with this music, but eventually, we decided we could attempt to make this an Armored Saint record. We reached out to Brian Slagel about this, and he was totally on board. Then, we went to the other guys in the band, and they were also on board. So, we sussed out the business stuff and went in to make Revelation. At the time, our intention was not to put the band back together per see, but rather keep it as a one-off. Over time, this gradually has turned into something a bit more than a one-off, but really, we try to keep this attitude about us as, “This is not make or break.” And I think this is what keeps us able to make strong records.”

You can read the rest of the interview with Joey Vera at Vinyl Writer Music’s website.