Black ‘N Blue and The Loyal Order bassist Patrick Young was recently interviewed by Rob Loiacano for the All Music/All Bands‘ Facebook page. 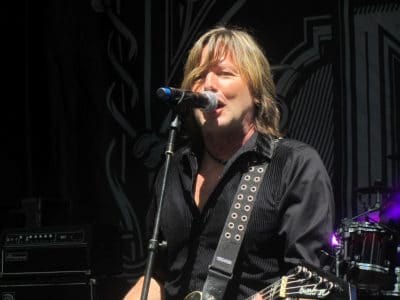 With Black ‘N Blue‘s last studio album Hell Yeah! dating back to 2011, Young was asked whether there were any plans for a new Black ‘N Blue album in the future to which he replied (with slight edits):

“As of now, there’s nothing in the works. It’s tough, since we are in two different states and aren’t together very much. Yeah we could do virtual writing recording, but we’re old and stubborn. And Black ‘N Blue writing back in the day was mostly [guitarist] Tommy [Thayer], [lead vocalist] Jaime [James] and a bit of [guitarist] Woop [Jeff Warner].”

“Hmm… that’s a tough one. First album is damn good, but has few drawbacks for me… mostly in the way we did pre-production for the album. There was none. It was all done in the studio as we went. And it kinda shows.

Without Love, I’d say two thirds of it is great. Bruce Fairbairn and Bob Rock did an awesome job. There’s a few songs that are just ok for me. The album cover is just a ….Huh??? Yeah ok.

Nasty Nasty — mostly great album… Terrible production. Mr. Gene Simmons helped get some great songs put together for that album. Then the old record company, pulled a cool song off and stuck “I’ll Be There For You” on it. Not a huge fan of that song. It’s not ours. It was done for a soundtrack that never happened and it doesn’t really fit in with the rest of the album. But mostly on the album, I thought the tonality of the recordings, and mix of the album, just ain’t very good.

In Heat — loved this album til Geffen Records fucked it up again. Sounds great, some really cool songs on it. Had a very cool tune we wrote with the Nuge [Ted Nugent] that was on it, and then old Geffen Records said they didn’t hear a single on it, made us go back in and do two weird ass songs that don’t fit. And to this day…. I’ve probably have listened to them once since then. They pulled the Nuge song, stuck those two on…. and then released “Live It Up” as the single, which was already on the album… Idiots.

Hell Yeah! turned out pretty damn good all things considered. A mish mash of songs… and it took 100 years to make it. But there are some really good songs on it.”

You can read the rest of the interview with Patrick Young at All Music/All Bands‘ Facebook page.