Vixen original bassist Share Ross made a shock announcement last night as she revealed to the Monsters of Rock Cruise Pre-Cruise Party audience in Miami, Florida, USA last night (on February 8, 2022) that she was taking a hiatus from the band. Ross also introduced her replacement Julia Lage to the concert attendees. 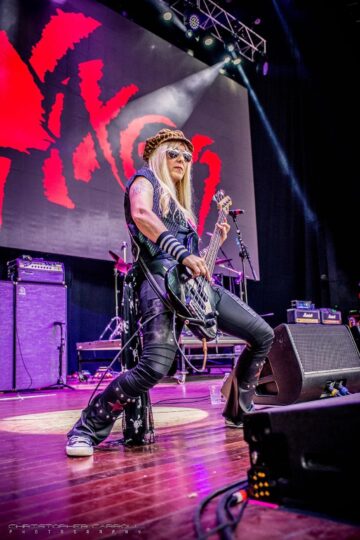 Ross indicated as follows (as transcribed by Sleaze Roxx): “… Something has to give and I am sorry to say that I have to step away from Vixen for awhile taking a hiatus and I know that you’re going to be supportive of the band and of me ’cause you know the love is there. And I want you to graciously love and open your arms to the amazing Julia Lage who is going to step in and play bass.”

The following message was posted by Vixen keyboardist Tyson Leslie on his Facebook page earlier today along with an accompanying video of Ross making her announcement:

I’ve come to really love miss Share Ross and I’m sad she’s leaving us for now. But life happens. You’ve gotta roll with the changes and do what’s best for you. Lots of changes are happening in my life right now. I have to move again. (More on that later), I have to move my mom again. I have to figure out a new path in my life just as Share is doing for hers.

One thing I do know. After hearing Julia Lage play tonight, I’m definitely not worried about sounding solid as a band. No rehearsal and she came in great with bass parts and great backing vocals too.

We’ll miss you a lot my friend. It’s been such a huge honor to play music with you in this band and to get to know you and Bam has been a truly wonderful experience.

Love you guys, and see you…. When I see you.

Vixen (with Share Ross) performing live at the Monsters of Rock Cruise Pre-Cruise Party in Miami, Florida, USA on February 8, 2022 (video from Will Travel For Gigs‘ Facebook page):

Vixen (with Julia Lage) performing “Edge of A Broken Heart” live at the Monsters of Rock Cruise Pre-Cruise Party in Miami, Florida, USA on February 8, 2022 (video from Will Travel For Gigs‘ Facebook page): 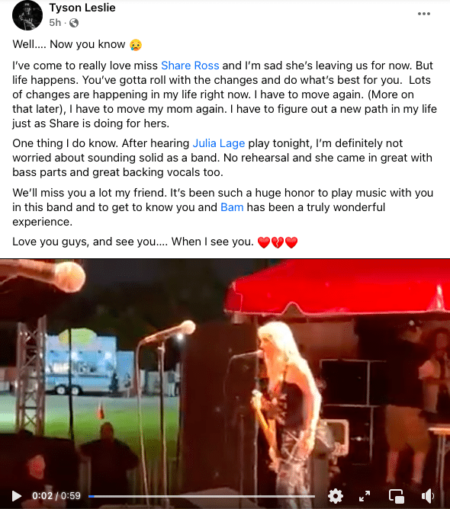