The inevitable appears to have happened as Stryper‘s long-time bassist Timothy Gaines is no longer listed as a band member on the Christian rockers’ website. Ever since December 2016, there has been speculation first fuelled by Stryper frontman Michael Sweet himself that the group might be recording a new studio album without Gaines. The latter has repeatedly posted that he has not quit the band but Stryper have never really confirmed that the bassist was still in the band.

While frontman Michael Sweet, guitarist Oz Fox and drummer Robert Sweet have always been part of the band since joining, Gaines was replaced according to Wikipedia in 1986 by Matt Hurich and from 2004 to 2010 by Tracy Ferrie.

In terms of Gaines‘ time away from the band over the years, Wikipedia has reported (with slight edits):

“Bassist Tim Gaines did not participate in the recording of To Hell With The Devil, and for a short period of time prior to the release of the record he was replaced by Matt Hurich. Hurich was not with the band more than a month, although he was outfitted with a yellow and black striped bass and a racing costume. Brad Cobb played bass on the album. However, when the promotional photos for the album were being shot, Gaines returned to the band and subsequently participated in its successful world tour. In 1987, the band headlined the Dynamo Open Air Festival in the Netherlands. There is one To Hell With The Devil promotional photo of the band with Matt Hurich that was used in print advertisements. Prior to his time in Stryper, Hurich was in Leatherwolf. In 1989, he performed with his Stryper bass in the group Divine Right, which featured Kevin Brandow (Petra) on lead vocals and guitar…

Stryper‘s fourth album, In God We Trust, released on June 28, 1988, also went gold, and the song “Always There for You” briefly entered the lower levels of the pop charts, peaking at No. 71 despite it being another massive hit on MTV. However, the sound of the album was more pop-oriented than previous releases[6] and a number of critics, as well as Stryper fans, criticized the record for being over-produced. In addition, the image of the band was moving even closer to the glam metal look of the era, giving fans something else to criticize. These factors led to lower sales, and the album spent only five weeks charting on Billboard. The second single and video, “I Believe in You”, peaked at No. 88 and a third single “Keep the Fire Burning” failed to chart. As with the previous album, Tim Gaines did not participate in the recording (Brad Cobb once again played bass) but later rejoined the group for another world tour. In God We Trust garnered two GMA Dove Awards for “Hard Music Album” and “Hard Music Song” for the title track…. 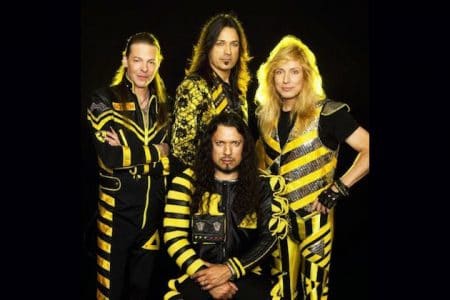 Stryper first reunited in 1999, when Michael Sweet and SinDizzy were invited to play at a summer rock festival in Cabo Rojo, Puerto Rico. As an encore, Sweet joined Oz Fox and Tim Gaines on stage and played several Stryper songs. Later, in 2000, the first “Stryper Expo” was held in New Jersey, and for the first time in 8 years the complete line-up of Stryper took the stage. That same year, a concert was held in Costa Rica at which the four members played together. A second “Stryper Expo” took place in Los Angeles in 2001. 🙂

Hollywood Records asked the former members of Stryper to record tracks for a new greatest hits compilation in 2003 7: The Best of Stryper. The compilation was released with two new songs, “Something” and “For You”, marking Stryper‘s first new music since the early 1990s. A tour followed in support. The band played 36 shows in the United States and finished the tour in San Juan, Puerto Rico. A live album, titled 7 Weeks: Live in America, 2003, was released the following year, and the concert in Puerto Rico was filmed for a live DVD produced and directed by Jack Edward Sawyers. However, that show in Puerto Rico proved to be the last for the original line-up of Stryper until their 2010 reunion. Gaines and the band parted ways in 2004 before they were slated to play Disney‘s Night of Joy in Orlando. Michael‘s bassist on his previous solo tours, Tracy Ferrie, replaced him….”