Apparently, someone is putting up posters of Lynch Mob‘s 2020 World Tour before the band’s line-up has even been confirmed. Yesterday, Sleaze Roxx announced that Lynch Mob consisting of guitarist George Lynch, lead vocalist Oni Logan, drummer Brian Tichy and bassist Tony Franklin were going to embark on a 2020 World Tour playing the album Wicked Sensation in its entirety (to celebrate its 30th year anniversary) along with some Dokken classics. 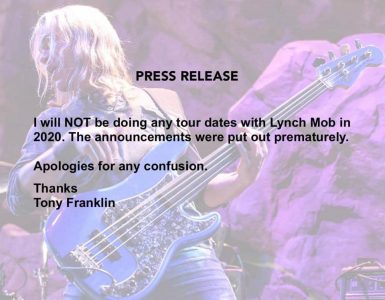 “Hey folks. I will not be doing any dates with Lynch Mob in 2020. The announcements were put out prematurely. Sorry for any confusion.”

Wikipedia states the following about Franklin‘s “Biography” (with slight edits):

“Born into a musical family, Franklin first took the stage at age 5. He got his big break in 1984 as bassist in stellar supergroup The Firm, with guitar legend Jimmy Page, vocalist Paul Rodgers and drummer Chris Slade (AC/DC, Manfred Mann’s Earth Band). Franklin‘s signature fretless growl was a distinctive and instantly recognizable element of the band’s first hit, “Radioactive”.

While maintaining his music career, from September 2003 through July 2011, Franklin served as Artist Relations Manager for Fender Musical Instruments Corporation and SWR. He returned to music performance full-time in mid-2011, when he joined Kenny Wayne Shepherd’s band for the tour supporting the guitarist’s 2011 album, How I Go. Franklin can be heard on Shepherd’s album, “Goin’ Home”, released in summer 2014.”