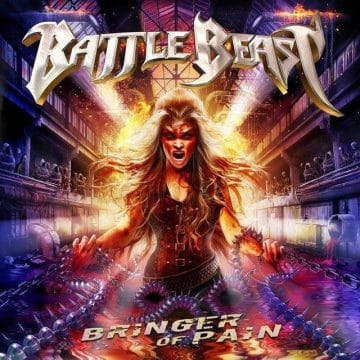 Finnish rockers Battle Beast have released a video for the title track from their new album Bringer Of Pain, which was released three days ago on February 17, 2017 via Nuclear Blast.

“No one will hold… THE BRINGER OF PAIN!”

Who’s up for some serious headbanging? To celebrate the release of the new album, we give you a music video for the title track “Bringer of Pain”! Play it on 11!

HEALTH WARNING: to avoid any serious neck or other injury, stretch properly before watching. For further information, consult your physicist.

Official video for the title track of the album BRINGER OF PAIN.Get it here: http://nuclearblast.com/battlebeast-bringerofpainSubscribe to NB: http://bit.ly/…

Official video for ‘FAMILIAR HELL’, off the album BRINGER OF PAIN.Get it here: http://nuclearblast.com/battlebeast-bringerofpainSubscribe to NB: http://bit.l…