Beastö Blancö, the band fronted by Alice Cooper‘s current bassist Chuck Garric, has released a video for their track “Solitary Rave” from their latest studio album We Are, which was released via Rat Pak Records back in May 2019. 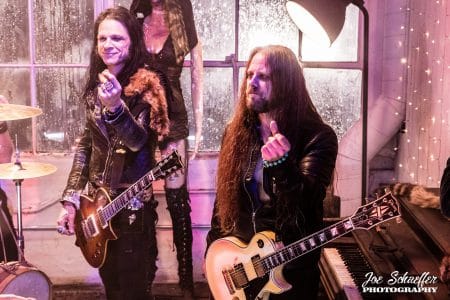 Amazon indicates the following: “Beasto Blanco – the band comprised of Chuck Garric (long time Alice Cooper bassist) on guitars and vocals, Calico Cooper on vocals, Brother Latham on guitars, Jan LeGrow on bass and Sean Sellers on drums – release their third studio album. We Are is the follow up album to their highly successful 2016 self-titled sophomore release Beasto Blanco. Influenced by bands such as White Zombie and Motorhead, Beasto Blanco‘s music is a potent mix of heavy riffs, driving bass and melodic choruses. From the album opener “The Seeker” to the closer “I See You In It,” it is clear that Beasto Blanco wear their influences on their sleeve. Tracks like “Solitary Rave,” “Perception of Me” and “We Got This” showcase that vocal interplay between Garric and Cooper, something that separates Beasto Blanco from these influences. CD features one bonus track: “Halcyon”.”