Big news for Beautiful Creatures fans as a remixed and remastered version of the group’s sophomore album will be released and include bonus tracks.

For the last few months, there have been rumblings that the band will be reuniting. Beautiful Creatures apparently reunited for the Monsters of Rock Cruise back on October 4, 2016 with singer Joe Lesté, guitarist Alex Grossi, bassist Kenny Kweens and drummer Timmy Russell rounding out the line-up. 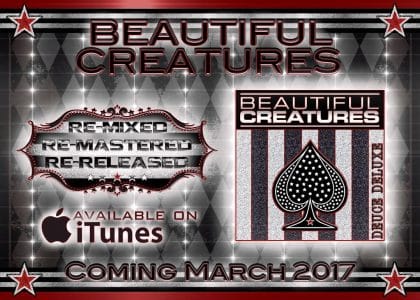 Beautiful Creatures have announced they will be releasing a remixed, remastered, re-seque nced “Deluxe” edition of their sophomore album “Deuce“.

Following Beautiful Creatures‘ self titled release in 2001, the core band (Joe LeSte (Vocals), Kenny Kweens (Bass) and Anthony Focx (Guitar) immediately entered the studio with a new lineup which included lead guitarist Alex Grossi and began recording material for the follow-up to their debut, which would end up being titled “Deuce“.

Beautiful Creatures founding bassist Kenny Kweens states: “unlike our Warner Bros. debut record, “Deuce” was never properly released digitally and nearly impossible to get physically due to all the changes in the industry -We are really looking forward to everyone hearing “Deuce” as it was meant to be sonically”

Beautiful Creatures “Deuce Deluxe” (which is currently set for a March release) will feature every track the band recorded for the Japanese Release (JVC Records) as well as the U.S. Release (Spitfire/Eagle Rock), In one digital package that has been re-mixed and remastered. It will also include new album cover artwork and edits that up until now, were not included in either initial release. For more info: https://www.facebook. com/BeautifulCreaturesMusic/? fref=ts

“We are really excited to be doing this”, says Joe LeSte “We have all been through a lot both personally and professionally as a band – and even though we have all gone down different roads, whenever we see each other or chat on the phone, it’s like no time has gone by at all. I saw Kenny (Kweens) and Alex (Grossi) on the last Monsters Of Rock Cruise, we ended up all onstage together playing a Beautiful Creatures tune, it was really fun – within 48 hours, all of our phones lit up. So, we collectively said – F#ck it, let’s go for it- and well, here we are!”

Beautiful Creatures playing “Kick Out” at Monsters Of Rock Cruise on October 4, 2016:

Kenny Kweens, Joe Leste, Timmy Russell and Alex Grossi reuniting as Beautiful Creatures on the Monsters of Rock Cruise and rockin the boat!!!!!