Beautiful Creatures‘ much anticipated reunion was announced a few months back and bassist Kenny Kweens went live on Facebook during the evening of March 6, 2017 to let fans know how the reunion got started and why the original line-up is not the reunited line-up. 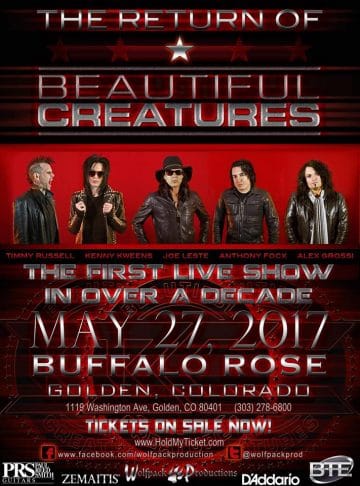 The following are excerpts from Kweens‘ comments on Facebook on March 6, 2017 (as transcribed by Sleaze Roxx):

“I guess I should start from the start. We played a show on — I’m sorry. We didn’t play a show. We played a song on the Monsters Of Rock Cruise together so back in October and it went over really well and the next day, everybody was asking questions and we had calls from agents and promoters wanting us to do shows and whatever. And I know a lot of you have asked, “Is it going to be or why isn’t it going to be the original five? The founding members.” We reached out to the original five members and everybody was down. We were going to do the one show type thing. Maybe another cruise or something like that when everybody had down time. And it got a little too difficult in negotiations as far as — I don’t know — certain people. So that wasn’t going to happen. However, it was Anthony Focx who said, “Hey. Why don’t we continue on anyway and do shows regardless?” And it seemed like a good idea and so we came uo with the idea of kind of starting off where we left off with Deuce, and that’s where that idea came from. And that’s why we are using the line-up that we are using — with Alex Grossi playing guitar, Timmy Russell on drums, myself on bass guitar, Anthony on guitar and Joe Leste singing.

And so we are going to re-release Deuce March 31, 2017 and you know, hopefully grow from there. We’ll see. I know that a lot of you have been asking about shows and stuff like that. I think we’ll do a show. We’ll do some shows for sure. We have been asked several times by different promoters in different venues. And if you want us to come to your area, I said this forever. Let your local venues and promoters know that you want us. Bug them and they’ll contact us. They’ll get in touch with our agency which is Big Time Entertainment and they’ll book us in your town.”

Beautiful Creatures playing “Kick Out” at Monsters Of Rock Cruise on October 4, 2016:

Kenny Kweens, Joe Leste, Timmy Russell and Alex Grossi reuniting as Beautiful Creatures on the Monsters of Rock Cruise and rockin the boat!!!!!

Kenny Kweens of Beautiful Creatures live on Facebook on March 6, 2017: