Behind the scenes video for KiLLeR DWaRfS’ “We Stand Alone”

Back in the 1980s, Canadian hard rockers, the KiLLeR DWaRfS, released some of the most entertaining music videos in the history of hard rock / heavy metal including for tracks such as “Stand Tall (Stick To Your Guns)” (see video below) and “We Stand Alone.” 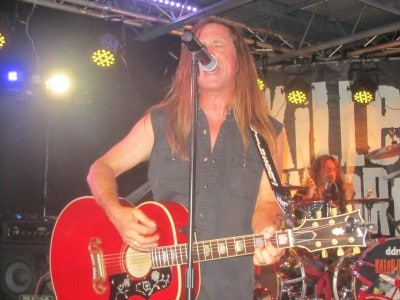 Baxk in February 2014, Sleaze Roxx interviewed the KiLLeR DWaRfS frontman Russ “Dwarf” Graham and asked him about two new songs that ended up not being included on Start @ One and when they might resurface. Graham stated: “There are a couple of tunes but there is so much to pick from. I could not even tell you the names of them. We are working on some stuff right now — some older stuff from that era that we have around that we demoed and stuff. It was just in early stages and things, so we are probably going to get together and turn it into some stuff. We have a few things coming out that you should probably see in the next couple of months.”

Behind the scenes of Killer Dwarfs’ ‘We Stand Alone’ video shoot in March of 1988. For those who didn’t get enough of the video on MTV’s “Headbanger’s Ball” …

Original promo video for Killer Dwarfs’ “Stand Tall” without any editing or effects done by music television stations. Rip is one generation from the master!…