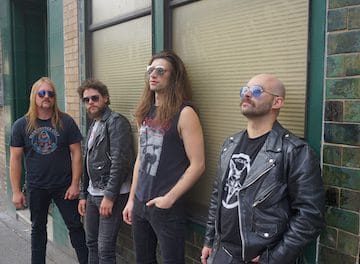 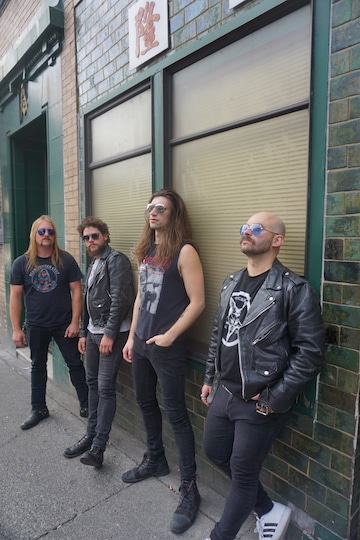 Speaking exclusively to Sleaze Roxx, singer Max Beretta provided the band’s origins as he stated: “Beretta is made up of several long-tenured musicians from the Seattle area. It includes current and former members of traditional metal bands like Sword of Judgment, Substratum, Blood of Kings, Fever, Arsenal, as well as Slutvomit, a black metal band currently on Invictus Productions out of Dublin Ireland. Myself and Myles Kent had been friends for some time when we started throwing around the idea of trying to channel some of the 70s and 80s rock influences we had into a project. He had been developing some material with Chad Goodman and Rick Jelsing, at which point he invited me to step in on vocals.

The material, to me, was so strong that the EP seemed to come together almost effortlessly. The idea was to step away from some of the current traditional heavy metal revival aesthetics and instead focus on the greasier aspects of our favorite records from Van Halen, Ozzy (Jake E. Lee and Randy Rhoads era), Rainbow, early L.A. Guns, Tygers of Pan Tang, Skid Row, Vain, you name it. Since the internet has long rendered geographically concentrated styles obsolete; nowadays everyone just spends time with their favorite records, finds like-minded musicians and it’s off to the races. You’re just trying to find some people you get along with because, if there’s no joy in it, I would maintain that there’s no point in doing it at all.

So there’s that and we’re just on the same page with the direction of the material. There’s some Diamond Head in there as well and plenty for fans of classic rock — ZZ Top, Aerosmith, Ted Nugent, Rory Gallagher, et al. Essentially, just busy, loose, overdriven guitarwork, anolog production that shies away from any compression, sampling, auto-tune, or triggering, and always trying to keep the energy up. For me, there’s a hint of darker stuff like The Cult and Fields of the Nephilim or Nosferatu (UK); that’s more subtle but I think important to vocal delivery and lyrical direction. More recent bands like the now defunct In Solitude were likewise big for me.”

In terms of why Beretta decided to release their self-titled EP digitally and on cassette, Max Beretta indicated: “Since the EP is (for now) an independent release, cassette made the most sense. That doesn’t mean we won’t have CDs at some point but there’s a big revival of the tape format happening, not simply due to the DIY appeal but the low overhead; this is important when you’re, say, initially fitting the bill like we are. Punks, metalheads, grindcore kids, death metalers, indie people — they all buy/produce tapes. Any complaints about sound quality don’t seem to take into account that tape technology is actually really good in this day and age; nor is it our intention to ever play over-produced music, to whose demographics this might be a deal breaker. We went almost exclusively analog with the recording on this one, a direction we plan to continue, so tape just works well with it. 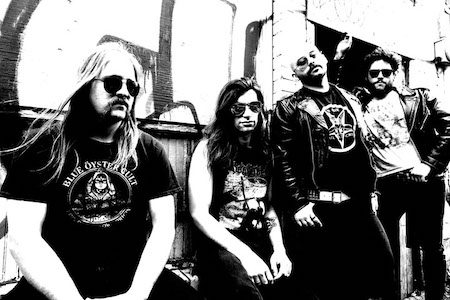 Everything was recorded live off the floor onto 2″ reel-to-reel, minus vocal and lead guitar overdubs, which were bounced to protools after the tracks had been recorded on 2″ tape. Cody Brumlow at Hanger 12 Studios did the record; he’s a local producer and musician with whom we had all worked on previous projects. He’s a great resource for whatever direction you might have in mind. If you want to go full digital with lots and lots of plug-ins and layering, he can do that. If you want to strip it down and do it in early 80s fashion like we did, he can also deliver. He’s done black/death/speed metal albums for Oxygen Destroyer, Toxic Reign, Slutvomit, his old band Weaponlord, and others. He also produces local hip hop artists, right down to the live instrumentation needed for beats. It’s really impressive stuff.”

With respect to Beretta‘s plans for the future, Max Beretta advised: “Another release, a couple of smaller festival appearances and hopefully a West Coast tour in 2020. We’ll see if the release will be a full-length, as we might be able to crank out a tasty 7” or a split first. I’m hoping we can hit everything from Vancouver and Victoria, BC to Los Angeles but that remains to be seen. There a lot of good bands all over the West Coast that are playing something that’s moving in our direction and I’d love to play with them  — Leathürbitch (PDX), Time Rift (PDX), Quayde LaHüe (Olympia, WA), Road Rash (BC), Castle (SF), Sandstorm (BC) all come to mind. There’s more where that came from in the Midwest and on the East Coast, so we would obviously love to make through there as well, not to mention overseas where you have a lot of great sleaze rock bands (think Crazy Lixx), 70s style hard rock in Sweden (Spiders, Märvel, Lucifer), rockin heavy metal bands like Bullet, etc. I think we’d have a great time overseas and that’s also certainly the goal.”