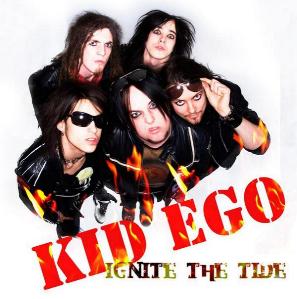 Another year has kicked the bucket and all that is left are memories of endless hours of work, drink, and music. Out of the hundreds of albums I got sent and bought throughout the year, once again I will make a list of the ones that spent the most time spinning around in my CD player. I’ll also stick to creating my list out of full-length albums of new material (EPs, live releases and re-issues are getting the shaft again) that had the biggest impact on me this year.

As 2006 progressed, I was starting to get worried that I would even be able to come up with ten albums that really kicked my ass, but then it seemed like everyone was releasing CDs in the later part of the year and it was getting hard to keep up. It also became harder and harder to narrow this list down to only 10 deserving albums, but a guy has to stop somewhere. 2006 turned out to be an incredible year for music, and these are the ones that stood out for me.

CD Review
Ignite The Tide was the musical equivalent of being caught in a tsunami, except you didn’t end up thrown onto the beach with a star fish lodged in your throat when things were over. For a young band that only formed in 2004, these English rockers kept the listener on their toes as something was ALWAYS happening – and as a result Kid Ego managed to out-gun everyone in 2006.

There’s something to be said about keeping things simple. All too often musicians feel the need to be innovative and preachy, but more often then not I prefer to use music to unwind from life’s problems and what better way then spinning Backwash’s latest album? Few things were as satisfying as letting this Swiss five-piece take me away to a better place with their shit-kicking boogie. Throw in some of the most memorable guitar riffs I’ve heard in a long time and you had the ingredients for a stellar release.

3. RHINO BUCKET – And Then It Got Ugly

CD Review – Band Website
All too often idols from my teen years return and let me down, but not Rhino Bucket. Sure they still borrow heavily from the AC/DC playbook, yet after a dozen years in hiding they came back with enough attitude and venom to make a gang-banger envious. Time seems to mellow people, but Rhino Bucket’s steady stream of tequila seems to have had the opposite effect.

CD Review – Band Website
Big Cock is the only repeat customer from my 2005 list and they kept the formula much the same. What is that formula you might be asking? Pure sleazy 80s hair metal, back to an age when a guitar solo meant something and when melodies/harmonies were as plentiful as the drugs being snorted up their noses. To top it all off Big Cock doesn’t take themselves all that seriously and the fun they are having comes through in the music.

CD Review – Band Website
Canada’s Stampede Queen often sounds like Kiss, but the later hasn’t sounded this inspired in over a decade. The majority of the albums on my list are rather predictable (I’ll always take well executed hard rock over experimental crap), but this one is probably the oddest of them all. Stampede Queen incorporates a healthy dose of humor with their heavy grooves and end up coming across as a talented bar band that just doesn’t give a fuck. The type of band that is as proud to play in front of 5 people as 5000.

CD Review – Band Website
Sleaze metal didn’t get any nastier in 2006 then this. They may call themselves the Crank County Daredevils yet if that Tasmanian Devil cartoon character was capable of forming a band I would imagine it would sound like this. These guys have attitude dripping out of every booze soaked pore on their bodies and managed to release an album that was almost too abrasive for one sitting. There are no singles here, there is no slowing down and there is no mercy.

CD Review – Band Website
Sweden’s Babylon Bombs are the type of group that are usually too ‘safe’ for my liking but everything is done so well and crafted with such precision on Doin’ You Nasty that they deserved a place here. In the early 90s a band like this would have dominated rock radio with their strong melodies and memorable choruses. However in this day and age all they get is a mention on a fan website like this, some consolation prize eh.

CD Review – Band Website
All the way from Finland come Wolfchild who managed to raise their game to the next level in 2006. There was a lot of power on this self-titled release and they captured it all perfectly. Some picture perfect guitar riffs swirl around the heavy bottom end. Of course everything will come down to one issue for listeners, do you like the vocals? I did, but none of that matters now as the band is looking for a new frontman!

CD Review
This album was a pleasant surprise and took me back to the heyday of hard rock. Maybe it was because vocalist Robin McAuley brought back so many great memories and sounds as good today as he did so many years ago. That wasn’t the only reason however, the band as a whole could easily shine on their own regardless of who holds the microphone. If Time Of Confusion had a few more songs it might have found a place even higher up on this list.

CD Review – Band Website
If there are any movie producers out there that need a soundtrack for a predictable slasher flick, give Wednesday 13 a call. This guy conjures up some laughable lyrics, but his modern day Alice Cooper persona is both interesting and entertaining. I think a ‘making of Fang Bang’ video would be a riot because I picture a group of hunchbacks pressing vinyl albums in Frankenstein’s castle.