UK rockers Beth Blade and The Beautiful Disasters have released a new song titled “Give It All You’ve Got” for streaming from the upcoming album Show Me Your Teeth, which is scheduled for release on January 25, 2019. The group has started another Pledge Music campaign to raise funds for its second studio album Show Me Your Teeth. 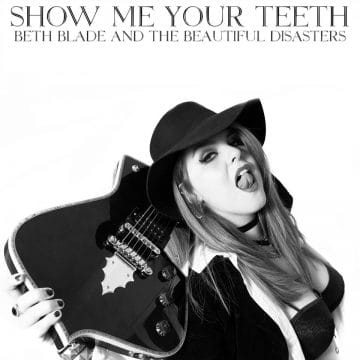 The group’s Pledge Music campaign, which has already raised 120% of the targeted goal with 59 days left, states:

“We are again teaming up with the amazing people at Pledge Music to bring you our second full length album! This will be the follow up to 2017’s successfully pledge music funded debut ‘Bad Habit’. You can pre-order the new album right now and if you joined us on our journey last time you’ll know what to expect but if you are new to pledge or to us you’ll gain exclusive access to updates from the studio, demo tracks, first look at the artwork and album title, videos and much more!

On top of that, we’ll be offering you first dibs on exclusive merch, personal items, studio and gig memorabilia and some surprises too!

You’ll be able to:

Get your hands on Sams snare skins from the studio, there are only two so move fast!

We’ll come play at your house or in your chosen space electric or acoustic with a custom setlist of your choosing or we’ll record a cover of any song in the world just for you!

Plus, you will get the new album digitally before its general release date!

By getting involved you’ll be supporting us on this special journey, your support and help so far has meant so much to us and we can’t wait to write the next chapter and bring you along for the ride.”

Beth Blade & The Beautiful Disasters‘ “Give It All You’ve Got” song:

Give It All You’ve Got- Audio Visualiser

The single ‘Give It All You’ve Got’ from the album ‘Show Me Your Teeth’ out January 25th www.pledgemusic.com/projects/bethbladealbum2