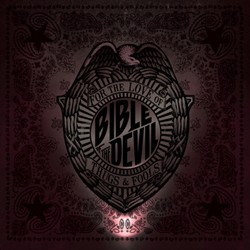 Bible Of The Devil Return With New Album In May

Bible Of The Devil is a four-piece high-intensity rock n’ roll metal band from Chicago, Illinois. Their sixth full-length album, entitled ‘For The Love Of Thugs & Fools’, is to be released in May 8th in the USA and Canada and June 8th in Europe via Cruz Del Sur Music.

The album is Bible Of The Devil’s eagerly anticipated follow-up to their2008 release, ‘Freedom Metal’, and is an assembly of raging rock n’ roll songs that encapsulate the band’s saga, musically and personally, overthe years since the last full-length. Returning to Phantom Manor studios in Chicago to work with engineer Mike Lust, who has engineered numerous BOTD recordings in the past, the band sought to emphasize their trademark bludgeoning two-guitar attack and mammoth hooks withan increased attention to soaring, anthemic vocals.

A song from the new album entitled “The Parcher” can be heard at Cruz Del Sur Music’s Bandcamp at cruzdelsurmusic.bandcamp.com/album/for-the-love-of-thugs-and-fools.

Bible Of The Devil have also announced a 14-date U.S. tour in support of their forthcoming release. Another European tour to start next October will be confirmed and announced shortly.

With numerous albums and 7″ singles to their credit, the band has carved themselves quite a niche in the heavy rock underground over the past 13 years as carriers of the flame of classic, loud, hook-filled guitar rock, yet with their own modern interpretation. The band has toured the United States and mainland Europe extensively during this period, and continue to do so in 2012, whether or not Mayan predictions of an apocalypse prove to be true.