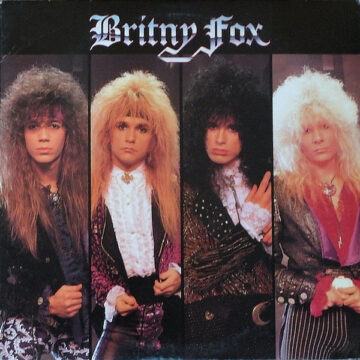 Smith and drummer Johnny Dee (Doro) who were together from 1987 to 1990. Wikipedia reports that Britny Fox‘s last show dates back to the Monsters of Rock Cruise in October 2016 with Childs, Dee, singer / rhythm guitarist Tommy Paris and guitarist Chris Saunders making up the band line-up.

On the future of Britny Fox, Childs indicated (as transcribed by the 80’s Glam Metalcast podcast with slight edits): “We did some shows a few years ago, but we just couldn’t get enough going on to keep it rolling. So we really weren’t doing much of anything and then the whole Covid thing happened. Nobody was really doing anything. But now, we’re looking to see who’s interested and trying to get some things going. We might be talking to Dean (Davidson) at some point. I don’t wanna say too much because it’s up in the air.”

In terms of the status of Davidson and Smith, Childs revealed: “The last I spoke to Dean was years ago. Maybe five or six years ago. Maybe even longer. At that time, he seemed interested in doing something. Me, him, and John got together. We all ended up in Philadelphia at the same time. He wanted to get together. We talked about doing something together and he seemed into it and we were into it too. John and I were pretty busy with the bands we were with and we didn’t hear anything. The whole idea dissolved. Here we are now, it’s a new time and I’m not sure what everyone is up to. I guess we’ll find out. I’m assuming that Mike (Kelly Smith) would be interested. I think he would be, we just haven’t talked. It’s not that far along yet. But we are in the process of trying to contact Dean and that’s #1 as far as that goes. I know John is into it, I’m into it, and I have a pretty good guess that Michael will be into it.”

You can listen to the interview with Billy Childs on the 80’s Glam Metalcast podcast below: