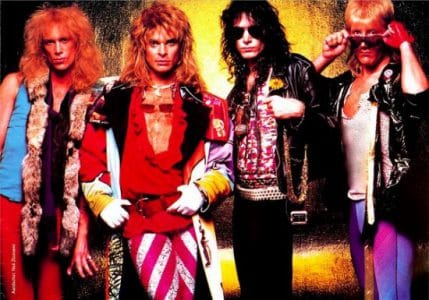 Sheehan stated: “It’s all up to Dave, if he decides to do it we are all ready to go and I would jump at it any minute.”

In terms of what is the greatest thing about Roth‘s character, Sheehan replied:”Entertainment is in his DNA and he has always got something interesting to say, he really has enhanced my life incredibly.”

Back in the summer of 2017, Sheehan was interviewed by eonmusic about the David Lee Roth band reunion that never fully materialized. Roth, Sheehan, Vai and Bissonette were scheduled to reunite to play two songs — “Shyboy” and “Yankee Rose” — from their debut album Eat ‘Em And Smile released back in 1986 at the Lucky Strike Live in Hollywood, California, USA on November 25, 2015. Unfortunately, the venue was closed down at the last minute by a fire marshall due to overcrowding before the group officially reunited and played.

Sheehan stated as follows to eonmusic about the chances that the band might reunite: “Maybe someday it will. It’s up to Dave, [but] I’m ready, Steve’s ready, Greg’s ready – we’re all ready. So if Dave decides to do it, we’re ready to go.”

The Metal Voice‘s interview with Billy Sheehan on January 24, 2018: