Say it isn’t so? One of the most successful “newer” bands — Biters — have reportedly announced that they have gone on an “indefinite hiatus.” 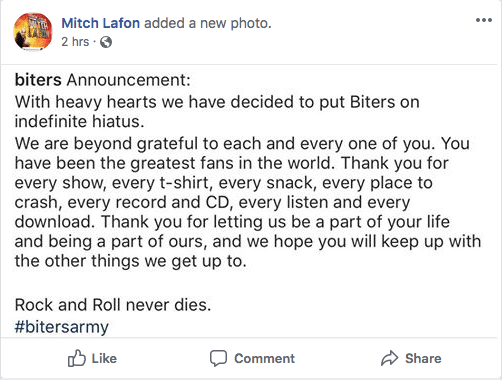 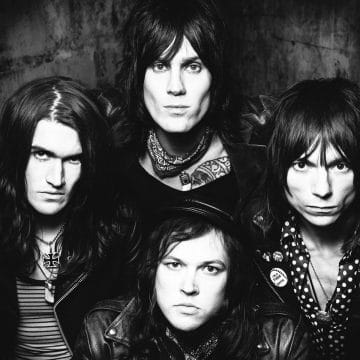 In an interview with Simon Rushmore for Rush On Rock in October 2015, Biters frontman Tuk was asked about the most serious setbacks that he’s experienced in his music career. Tuk replied: “You name it we’ve been through it. For starters we haven’t had any real financial backing up to 2014. When you’re in a band and you’re playing rock and roll you have to be rally crazy to even think about doing it. Constantly being surrounded by alcoholics and drug addicts starts to wear on your soul. Coming back home and washing dishes or selling drugs or mooching off some girl just to get by – that sucks. But you just do what you have to do. You never know if you’re ever going to find a record label or strike a deal. Biters has been on hiatus before. Members of the band have been locked up for a certain period of time. It’s been hell but where there’s a little chink of light at the end of the tunnel you keep going.”

In terms of doing a headline tour of the UK, Tuk indicated: “I’m torn thinking about it really. Sometimes you really believe in yourself and you think you can take over the world and sometimes you’re in El Paso playing in front of 25 people and you question whether it’s all worthwhile. I suppose you have to maintain a positive mental attitude. When I’m well rested I think we have the potential to do a lot of things with this band.”

In an interview with Over Drive in May 2017, Tuk stated the following: “We have people now saying to us, “You guys have changed since you’ve been making money” and by that, they mean since we got signed to Earache Records. People are just so fucking stupid and they don’t need a fucking licence to get online and publish their bullshit. Just because you sign a record deal doesn’t make you rich!

I’m probably poorer now than I have ever been in my life because I can’t work part-time. That’s the fucking reality of rock n’ roll 2017 kids! (laughing) I don’t play rock n’ roll for the fucking money or the fame – I do it because I love it and it makes me feel alive!

It’s not a gimmick, because who would want to live like this? If I just wanted to be “cool”, I would do something else for a living. Yeah, there’s a big misconception when it comes to this business. Hopefully, something changes in the music industry and people just get sick of the fucking garbage that is flooding the charts. I can only hope man.” 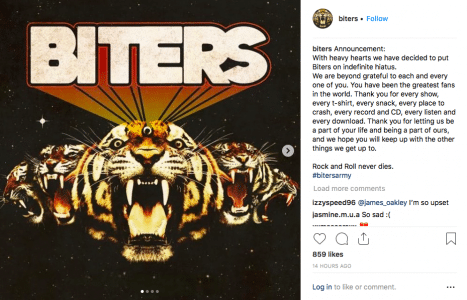